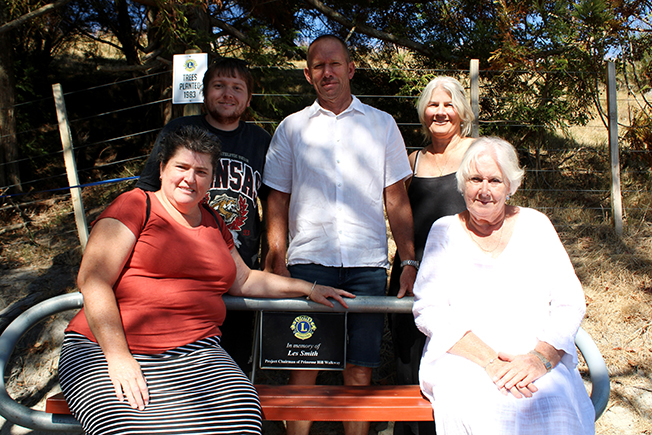 If Les Smith could have seen the completed Lions Centennial Walkway, which wraps its way around Primrose Hill in Paeroa, he’d be “chuffed”, his family said.
The proud Lions member kicked the project off before he died in November, 2018.
The walkway had its official unveiling on March 16, with a seat constructed along the trail to honour Les’s hard work.
Graeme Wood, who was president of the Paeroa branch in 2016-2017, said all clubs worldwide were challenged by Lions International to create a project to celebrate 100 years of Lions.
“Les was our projects chairman, and he went off on his own and did some investigating to see if he could find something we could sink our teeth into,” he said.
“Unfortunately Les passed away and he didn’t see the completion of this project, but he was really satisfied with what he’d done on the first stage.”
The centennial walkway connects Primrose Hill – the highest point in Paeroa – with surrounding streets, and is an easy route with slight inclines that cross under trees and over farmland.
Lions first planted trees at the site in 1983 – and Les had a hand in that, too.
His family said he was a proud Lion and an advocate for the local community.
“It’s a shame dad isn’t here,” his daughter Natalee Pearson said. “He’d be chuffed… and humbled that the chair is named after him.”
Allan Jenkison became project chairman after Les, and said his predecessor got stuck into the job ahead.
“It was a passion for Les right from the word go and you could see it was written all over his face.
“It was a pleasure to get it done, a pleasure to get the track through the trees like Les always wanted, and I’m quite proud of it,” he said.
Hauraki district councillor and Paeroa ward chair Carole Daley attended the opening and said it was a “wonderful achievement”.
“I’ve watched it over a number of years, like a lot of people have, and to see it like it is… it’s an asset for Paeroa. I just want to say thank you to all the people who have ever been involved with it.”