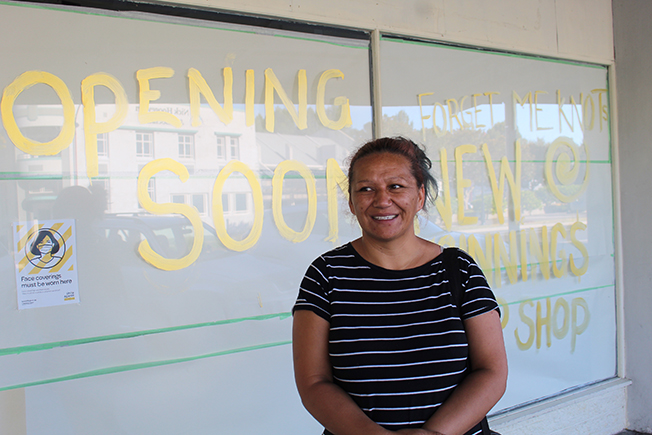 Raising funds for emergency services will take place during a charity opportunity shop’s grand reopening on Saturday after last month’s fire engulfed its store on Paeroa’s main street.
The op shop will reopen in a new premises on Normanby Rd, and with a new name – Forget Me Knot’s New Beginnings.
Owner Susan Turner said her store would continue to support the local community after reopening.
“We do it for the love of giving, we donate raffle hampers for the elderly lunch at Paeroa Racecourse, we did a Christmas raffle last year for the Paeroa RSA building fund,” she said.
“The first fundraising idea once we open is a money trailer on our new counter to raise funds for the fire service and then St John, because they were the services who helped us on the day of the fire.”
Susan said she was initially devastated after the fire, and couldn’t bring herself to go into what was left of the shop.
She then learned a safe containing around $300 stolen from the charred remains of the charity op shop before the site was boarded up.
But she soon switched into “survival mode”, she said.
“The focus has been on getting the shop open since the day after the fire and I’m very excited to have the shop open again, not for myself but for the community,” she said.
“Some have said I should take this opportunity to have a break and a holiday so there’s no rest for the wicked, but I say no, I’m dedicated.
“One door closes and many more open, I look at everything in a positive light.”
Susan said she had her new premises lined up before the fire and had brought forward her plan to move in.
“It turned out to be a blessing in disguise because we now have a bigger premises.”
Susan said since the fire, which was believed to be caused by an electrical fault in her store’s kitchen ceiling, there had been “overwhelming” community support.
“People from as far away as Matamata, Tauranga and Whangārei have brought donations to get the shop off the ground again,” she said.
“We’ve probably received six trailer loads of clothing, bric-a-brac, electronics, furniture and I had to say stop on the clothes because it was becoming ridiculous for the capacity of storage.
“We’ve also got a 20ft container and a five bedroom house where we’ve been storing stuff.”
Susan said her husband Bear and nephew Arona had helped with reopening preparations.
She also had support from Thames Kiwi Rescue, Hauraki Resource Centre, Scotty’s Wheels and Tyres, the Tongan Community, St John Thames and Ngatea, and Paeroa Refuse Centre.
DETAILS: Forget Me Knot’s New Beginnings will open on March 26 with a blessing at dawn before doors to its new store on 80 Normanby Rd open at 8:30am. There will be a sausage sizzle outside the store throughout the day.