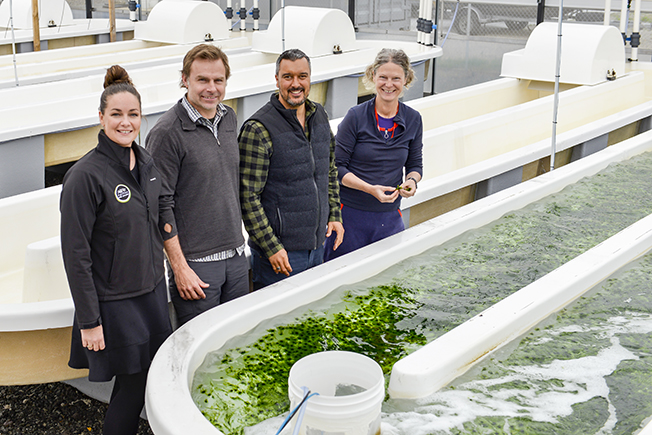 A nationwide first land-based seaweed trial aiming to clean up the country’s waterways is about to get growing beside the Firth of Thames in the Hauraki Gulf.
Paeroa seaweed innovation company AgriSea is working with the University of Waikato on a two-year sea lettuce (ulva) growing trial at Kōpū.
Backed by the Ministry for Primary Industries’ Sustainable Food and Fibre Futures fund, seaweed will grow for 12 months in three tanks drawing water from the Waihōu, with data collation and analysis in the final year.
The seaweed can be turned into high-value products while the process of growing it has a multitude of benefits.
AgriSea managing director Tane Bradley said seaweed didn’t have root systems so grew by pulling nutrients from the water around it.
“In this case, as ulva grows, it pulls nitrogen from the water and incorporates it into its tissue.”
Known as bioremediation, the project will use seaweed in an attempt to clean excess nutrients from the Waihōu.
“The seaweed in tanks will act as a sponge and filter feed on excess minerals like nitrogen, phosphorus and other heavy metals – in short cleaning up the water, which is then returned to the sea, filtered and clean,” he said.
The two-year project is a collective effort, with University of Waikato Environmental research fellow Marie Magnusson leading the research team.
The locally present species of ulva will be cultivated at the university aquaculture facility, where researchers will use DNA barcoding to confirm its genetic identity.
It is estimated that up to 50 tonnes of dry ulva per hectare could be produced from a scaled-up facility, providing the biomass for added-value products.
The bulk of the investment of $697,000 is from the Ministry for Primary Industries’ Sustainable Food and Fibre Futures fund, with $108,000 from AgriSea and $150,000 from the Agricultural and Marketing Research and Development Trust.
Thames-Coromandel District Council is gifting the land lease worth $40,000 for the project, with support from Ngāti Maru and Ngāti Hako. Hauraki District Council, Waikato regional council and Te Waka are also supporting the project.
“Local Iwi are heavily invested in the health and wellbeing of our waterways and if this pilot proves successful, will look to upscale the on-land bioremedial systems in the Hauraki area,” Mr Bradley said.
AgriSea is already partnered with Farm Source, helping farmers improve soil and water quality using the company’s seaweed bio-stimulants as an alternative to chemical fertilisers.
Bio-stimulants made from seaweed are high-value macro-algal products used on dairy, sheep and beef farms as well as in the apiculture, horticulture and viticulture industries.
Agriculture Minister Damien O’Connor said the trial sought to address an important environmental issue.
“Currently the loss of nutrients not absorbed by plants enters the soil and drains into groundwater that leads straight to our waterways,” he said.
“This promotes algal blooms which reduces oxygen levels, which then threatens animals such as tuna [eels], kākahi [freshwater mussels], kōura [freshwater crayfish], and īnanga [whitebait],” he said.
Seaweeds were being increasingly recognised for their potential, Mr O’Connor said.
“If successful, this will be an environmentally-friendly way to improve water quality, create jobs in the science sector, revitalise our waterways and improve our on-land farming systems.”