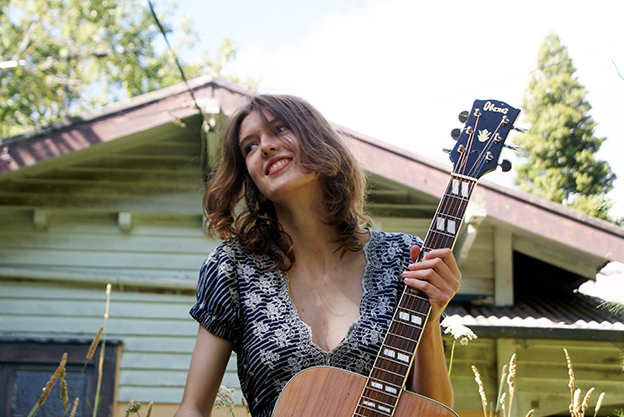 Beth Torrance-Hetherington recorded most of her songs in her Whakatete Bay home. Photo: SUPPLIED

A Thames High School year 13 student whose music delves into what it’s like to be a teenager has released her debut album.
Beth Torrance-Hetherington’s debut album, Let’s move to the seaside and never feel lonely again, features eight tracks inspired by real life events.
Beth told The Profile the album had been two years in the making with all her songs written and mostly recorded in her Whakatete Bay bedroom in 2020.
“It’s been pretty eventful, everyone really likes it [the album] and there’s been a lot of positive feedback and response,” she said.
“I think my music is quite relatable to an audience my age in that it covers some really key ideas of what it’s like to be a teenager and what it means to grow up and the fears which come with it.
“I’m very drawn to lyricism, production, and the way poetry interacts with music I think is what’s beautiful about songwriting.”
Beth said two of her album’s songs, Let’s move to the seaside and never feel lonely again and I really really really really like u, were about capturing different emotions.
“Let’s move to the seaside and never feel lonely again was written during [2020] lockdown and it’s about feeling a bit isolated and a bit lonely, and missing people that you love,” she said.
“I really really really really like u was written a couple months earlier and it’s about capturing a feeling of happiness.
“Version one at the end of the album is a real snapshot of that emotion… and version two at the top of the album is a more downbeat live version with rain to make it a bit melancholy.”
Beth, who intends to study pop music and English at university next year, said she’d been interested in music her whole life.
“I took piano lessons for a long time and then moved on to guitar when I was ten. Once I learnt some chords, I could hone my technique and I practiced and learnt songs that I loved,” she said.
“We have these recordings of me singing songs like Twinkle twinkle little star when I was four and recently we found a tape when I was seven of me singing the first song I wrote and it’s quite fun to listen to.”
Beth’s journey to her album’s release included working with Supergroove frontman and award-winning soundtrack composer, Karl Steven.
“It was really great, we got along well and we had the same vision,” she said.
The album’s been reviewed by New Zealand-based music website Under the Radar and New Zealand music critic Matthew Crawley, who was stocking tapes of her album in his Flying Out Records store in Auckland.
Let’s move to the seaside and never feel lonely again has also been played on RNZ.
Beth had also been able to show off her songs to live audiences while touring with New Zealander singer, Kendall Elise, recently.
“I’ve loved touring with Kendall, she’s so lovely and it’s been fun to get a taste of what it’s like. I really appreciate her taking me under her wing,” she said.
The pair have performed in Raglan, Wellington and Thames and are set to perform in Auckland, Whangārei and Tauranga in April.
Beth’s debut album is available on Spotify, Soundcloud, iTunes and Bandcamp.