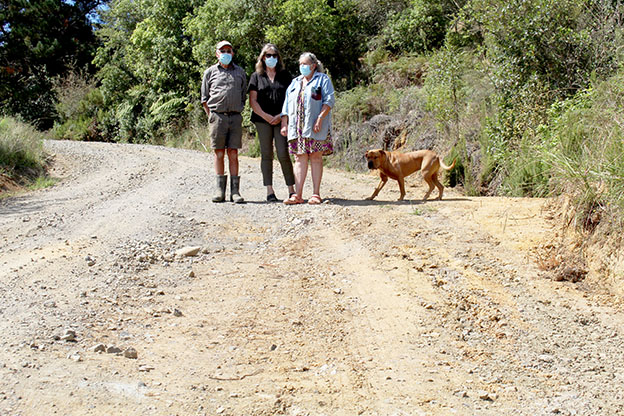 Goble Rd residents are concerned about the poor condition of their road. Photo: GORDON PREECE

Goble Rd residents fear damage to vehicles and their grandchildren not being able to visit due to the “shocking” condition of their gravel road.
Terry and Yvonne Maitland, who have lived on the Komata road just north of Paeroa for 15 years, said the road was damaged by logging trucks in September last year following inadequate maintenance by Hauraki District Council.
“The [logging] trucks were going to come up and the road was already in poor repair before that, so it would’ve been a wise thing to upgrade it a bit before the [logging] trucks were going to come up,” Terry said.
“The logging has to go on… the logging trucks weren’t a problem on the roads but the road was damaged before they got here.”
Terry said contractors attempted to repair the road’s clay patches before logging began but said the job they did was “absolutely shocking”.
“Initially they were told to put in some heavy metal but the first patches they did was money down the drain because the truck just destroyed it,” he said.
“The biggest thing that concerns me is [council will] say they’ve used their budget up, which they probably have, because [the contractor] wasted the council’s money through sending people up who couldn’t do the job.”
Yvonne said it was “a mission” to drive on the road.
“I would dearly love my grandsons to be able to drive up and visit… now they can’t come up because they have two wheel drive vehicles,” she said.
“Stock trucks don’t want to come up here anymore because of the road… and one of the neighbours had to tow the truck carrying new windows for his house from halfway down the road.”
Yvonne said this wasn’t the first time the road had issues.
“When we came here, the road was a good gravel road, and well maintained for about three or four years, and then it just turned to custard,” she said.
“I’ve regularly for the last ten years gone [to council] and complained and have gone in with previous residents who’ve since left as well.”
A resident, who didn’t want to be named and had lived on Goble Rd for 43 years, said the road wasn’t affected when logging trucks had used the road previously. “It’s a lack of maintenance which has caused [the damage],” he said.
There were patches where road workers scraped 100mm through the metal, he said.
“There’s absolutely no need to and the foundations [have] gone over the side of the road into Hutchinson’s Reserve and waterways.
“The metal will have to be replaced and who’s going to pay for it – ratepayers.
“[Neighbours] can’t get anything from the council, the council divert it to somebody else.”
A council spokesperson said Goble Rd was in “good condition” prior to the forestry operations, and a number of rain events during the forestry activity exacerbated the damage.
“Aside from making some temporary repairs, the very dry weather has meant that we have not been able to make good the damage to the road as yet,” she said.
“This is programmed to take place once we get more favourable weather.”
Council said it completed inspections of Goble Rd in January after logging had finished and a $53,000 programme of work was approved, which will be billed to the forestry company.
This includes $14,000 for drainage repairs already completed and a further $39,000 for approved road repairs and re-metalling, which began late last week after enquries by The Profile.
“When considering the entire network, there is typically more work to be completed than budget and resource allow, i.e. we can’t always complete the works we want, when we want to,” the spokesperson said.
“We are working to improve the condition of the entire unsealed network. Disruptions to our programme following the likes of forestry activity in combination with the effects of Covid-19 on available resource, cause delay to this.”

‘We don’t deserve this’