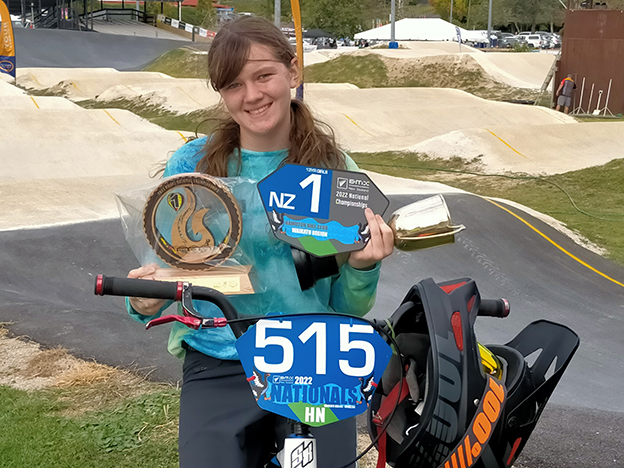 Danika Bergersen, 13, competed at the BMX National Championships and gained the title of New Zealand Number One for her age group, 13 girls. Photo: Alisha Lovrich/Hamilton BMX

Danika Bergersen’s commitment and dedication to the sport of BMX has seen her clinch her “best result” at a national competition.
Danika recently entered the BMX National Championships hosted by Hamilton BMX Club, where she finished first in all of her races and gained the title of New Zealand Number One for her age group, 13 girls.
The Hauraki Plains College student said she was “over the moon” with her result.
“Every race is basically a final,” she told The Profile. “I got told to take deep breaths and picture that you’re somewhere else, not trying to pressure yourself, otherwise your body starts freaking out.
“Before I go into the gate, I take two deep breaths, and once I’m on it, I take two more.”
BMX racing is a type of off-road bicycle racing, in which competitors sprint across purpose-built, single-lap race tracks.
Danika started racing at the Paeroa BMX Club when she was six-years-old, moving across to the Hamilton BMX Club three years later, where she was training up to six times a week in the lead-up to the nationals.
And living just out of Ngatea means the entire Bergersen family is committed to the commute, with mum Donna, dad Ron, and sister Kiarna, 11, involved each step of the way.
Danika said her family was “100 per cent” supportive, especially her younger sibling.
“When I’m on the track, you can hear her screaming across the other side. I haven’t been there that much at home, but it’s cool she doesn’t stay angry about it.”
Danika said while there were initial thoughts BMX riding might be a phase for the then-six-year-old, her parents saw she was “going to be quite good”.
Over the years, she has been acknowledged with a variety of accolades, including being named the 2020-2021 Waikato Region Sportsperson 13 yrs and under; receiving the Hamilton BMX Club Sportsperson Trophy for 2018-2019; and the Rika Family Cup for Most Improved female rider in 2015.
She also volunteers with the Hamilton coaches, helping train the younger club members.
However, the up-and-comer did have to take a break from the intense sport for around two months after she fell off her bike during a race against seven other riders.
“Basically, whoever won it was going to get captain, and we all came down the hill, and two riders crossed over in front of me – and it’s an 8m hill, keeping in mind,” she explained. “When we came down, I fell off with the other top rider… and ended up with a broken elbow.”
But Danika’s ambition hasn’t faltered, with the Hauraki teen eyeing up next year’s nationals in Tauranga, as well as the BMX Worlds in Scotland.
Her mum Donna told The Profile the family was proud of her accomplishments so far.
“When you see the achievements and the happiness, you don’t even think twice about taking her over (to Hamilton) and supporting what she’s doing.”