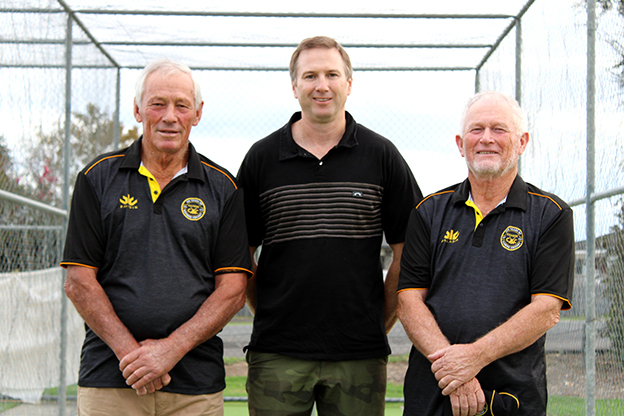 Mike Davis, left, Graeme Beagley, and Andy Davis, have all had a hand in ensuring Kaihere Cricket has a good team culture on and off the pitch. Photo: KELLEY TANTAU

Something has been stirring underneath Kaihere Cricket Club’s “laissez-faire” appearance.
Whether it’s the player’s passion for the game, or the generational makeup of the club, or its “no d*ckheads” policy, the team known as the Cougars have tapped into something that makes their 100 years of operation a rare feat, but an unsurprising one.
“We’re not flashy, but we play good cricket,” Mike Davis says.
This year marks the club’s centenary, and with the cricket season’s end, it also caps off another great result for the Cougars.
In March, the team won the Chairman’s Trophy in the Waikato Valley B Grade Championship final against Pirongia. It’s a back-to-back result after claiming the trophy in 2021.
Sam Aislabie, the club’s on-field captain and team manager, says Kaihere has been successful in recent years.
They get two bites at winning two trophies of equal value, one post and one pre-Christmas, and over the past 10 years, they’ve won either six or seven of them, he says.
“We’re not trying to do anything crazy on the field, but we do like to be able to go out there and take it seriously for the time we’re out there.”
The Kaihere Cricket Club was formed in 1922, with AJ McDonald being its main instigator. He died in 1968 having been the club’s president since its inception 46 years prior.
Through the 1920s-50s, games were played at school grounds and farmer’s paddocks against teams from Waitakaruru, Hopai, Pipiroa, Ōrongo, Ngatea, Turua, Maramarua, Kerepēhi, and Kopuarahi.
The club went into recess for the duration of World War II, but when players such as Mike and Andy Davis joined the club in the 1960s, there were still eight rival teams on the Hauraki Plains alone.
“As the years have gone by, teams have disappeared, because it takes administrators for the game to continue,” Mike tells The Profile.
“We’ve been fortunate that when Andy and I have finished up, or Bob O’Dea finished running the place, Graeme [Beagley], Mark [Harris], and now Sam have picked up the baton.
“That’s the key for a country sport.”
Sam, 32, played his first game for Kaihere back in 2004. He’s from a family of Cougars, as are most of the players. In fact, the club is “riddled with” generational influences, the men say, and they’ve often witnessed games where there were only three families on the field.
“As the older generation, we really appreciate what the younger guys are doing and vice versa,” Mike says. “The reason we do as well as we do is because we’re loyal, and we stick to our guns, come hell or high water, and there’s been a bit of high water.”
Andy says cricket is a game where success isn’t easily found, but at the moment, the team spirit is the best it’s ever been.
It all boils down to having a good team culture, Sam says, and there’s a recurring theme that players without good personalities never seem to stick around.
“You see a lot of club teams that have two or three good players that do everything: they do all the batting, do all the bowling, get all the runs, get all the wickets, and it’s not like a selfish thing, but it is really hard to get people to come along who aren’t going to be doing much,” he explains.
“So, the way we’ve always run the team is that most guys will get a chance to have a bat or a bowl. Participation is really important, everyone’s got a role in the team, and everyone’s contributing, so I think that’s a real strength of ours.”
The others agree.
“There’s been a lot of people in the club that haven’t had a hell of a lot of success, but they’ve continued to play and have enabled the rest of us to carry on,” Andy says.
“There’s a pride in playing for a team,” Mike adds, “and Kaihere has always been a team.”
Throughout its 100 years, the club has been helped along by many players and administrators, including former All Black Bob O’Dea, who, in the record books, was said to have smashed five centuries in the 1952-53 season.
Now, with the likes of Graeme Beagley putting time and effort into secondary school and primary school cricket, more young people are becoming interested in the game, thus ensuring clubs like Kaihere can continue going strong for another century.
“What we would like to see is the return of more Thames Valley teams,” Sam says.
“They’ve got a social competition that is around two years old, so it’s starting, but a big win for us would be to see some social teams start playing Saturday club cricket again and just take it that one step further.
“But the reason we’ve stayed around is because we’ve had a good culture, and we’ve had our focuses in the right areas,” he says. “We haven’t been the best on the field, but we’ve made sure to keep going.
“I’m under no illusions that it’s going to get hard again at some point, but at the moment, it’s really, really good, so it’s more about trying to enjoy these good times.”