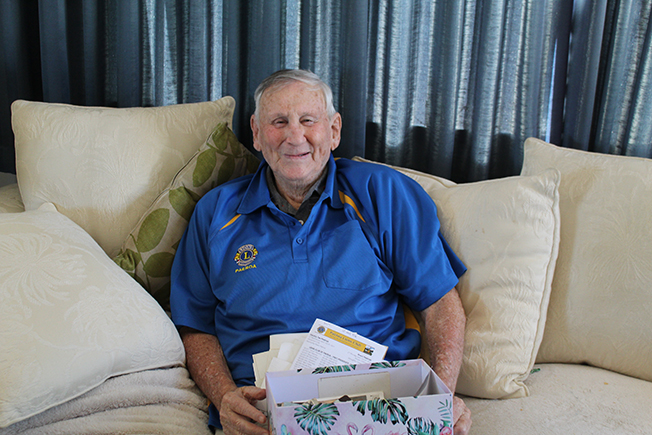 Raising money for a girl’s kidney transplant was one of many great memories for a Paeroa Lions Club veteran.
Gordon Shaw was recently rewarded for his 55-year service with Paeroa Lions and told The Profile while being made a life member about five years ago was more important to him, it was “probably still a big thing” to have served 55 years.
“I went to a zone meeting a while ago and most of them had been Lions for two or three years and I said to them I’d been a member for over 50 years and they looked at me like I was a dinosaur,” he laughed.
Gordon said what attracted him to joining Paeroa Lions as a 31-year-old Netherton dairy farmer was the comradeship and treatment by fellow members.
“My father was a member so I knew a little bit about [Paeroa Lions]…and my wife was very keen that I joined,” he said.
“When I accepted… most members were a lot older than me in their 50s and 60s…so I felt like I was a fish out of water, but they really made me feel welcome and I’ve made some great friends in Lions, unbelievable really.”
Gordon, whose father Leslie was also Paeroa Mayor, said he’s always enjoyed team meetings, heading along to Lions conventions and doing community projects.
“I’ve always admired what we do in Lions,” he said.
“About ten years ago we raised $150,000 in Paeroa for a girl called Kylie Strongman so she could go to Australia to have a kidney transplant.
“It only cost $30,000 so we had $120,000 left and we gave it to Ronald McDonald House in Auckland.”
Gordon said he developed confidence and became a “pretty good” public speaker when he was president in 1972 and 1973.
“My family always asked me to be the toastmaster at weddings so I knew I did a good job because otherwise they wouldn’t ask me,” he said.
Gordon didn’t think Lions had changed a lot during his 55 years but said it’s probably not as strict now.
“When I first joined, we had a special night to find out what a Lion is and was, and some of those things have gone by the wayside, which is a shame because you’ve got to have this continuity about what goes on in Lions,” he said.
Gordon said Covid-19 had been “terrible” for Paeroa Lions.
“We’ve lost a lot of members, some don’t want to be inoculated, some don’t want to be involved with people, so our membership is dwindling a bit now,” he said.
“We were always around 40 to 45 but we’re lucky if we get 20 to 30 now to a team meeting.”
Gordon said he initially didn’t like the idea of women joining Lions but had changed his mind.
“We’ve got about four young women in our Lions and they’re some of our best Lions and I get on well with them,” he said.
While Gordon finds the physical side of Lions difficult nowadays, the 86-year-old said he’ll continue roaring as the organisation’s treasurer until he “can’t do anything”.
“I worked for an accounting firm for about 15 years so accountancy to me is a piece of cake.
“I’m sure when I give my report to the meeting, half of them don’t understand what I’m talking about,” he laughed.