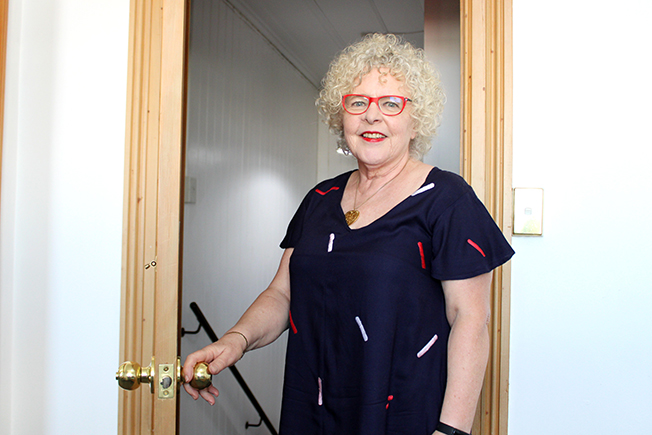 Sue Lewis-O’Halloran is happy to be back with family and a job she loves. Photo: KELLEY TANTAU

A Thames woman who was “outside of the country looking in” during the start of New Zealand’s Omicron outbreak was made to feel like an “enemy” as she battled with MIQ to return home.
Sue Lewis-O’Halloran, chair of the Thames Business Association, headed back to her native Canada in order to support her son and his family, after her daughter-in-law suffered a “massive” stroke on November 18.
“She is young and very fit and a mum to two little girls. A week later, when speaking with my son, we agreed that I would go there for Christmas, to support the family.”
Sue said their lives had been changed forever by the stroke, and again by the three months that followed.
With managed isolation (MIQ) being an unviable option for Sue due to her suffering from claustrophobia, she applied for a medical exemption, with a letter of support from her GP.
“Just prior to my departure in mid-December, Omicron started to spread in Canada, so pre-departure testing was joined by arrival testing, once on Canadian soil. At this point, we decided to proceed and take our chances that the MIQ medical exemption would come through,” she said.
“And then the MIQ lottery was halted.”
Sue was to return to New Zealand on January 7, but was advised two days earlier that her medical exemption application had been declined.
“The Ministry of Business, Innovation and Employment (MBIE) believed that a room with a window that opened would solve my problems, so I wrote back and said that was not the case.”
What ensued was an email correspondence that continued through to the end of February, with Sue sending letters from her dentist, the business association board chair, and local MP Scott Simpson.
“The answer was always ‘no’,” she said.
“I maintained a positive, upbeat attitude for the most part, particularly because I was with family and supporting them through a very challenging time, but what disturbed and discouraged me most of all was the vitriol spewed on Facebook by people who had no knowledge of our situation.”
Sue told The Profile how “shocking” it was to see the divide between Kiwis in New Zealand, and Kiwis trying to get home to New Zealand.
“It was: your fault, you’re an idiot, shouldn’t have travelled… and on and on. It was obvious that this was a very divisive issue.”
Then, on February 27, the country’s border opened to New Zealanders and other eligible travellers coming from Australia to return to New Zealand and self-isolate on arrival.
From March 4, the border opened to New Zealanders and other eligible travellers coming from anywhere in the world. They did not need to self-isolate when they arrived.
Sue said she was “ecstatic’ and arrived back home on March 8, after testing negative for Covid-19 prior to departing Vancouver, again on arrival, and also on Day 5, March 13.
But the whole ordeal left her drained.
“I cried when I came into the arrivals area – the sound of the tui hit me hard. I was home and happy to be here; however, I was sad and angry too at my experience and those of the one million forgotten Kiwis,” she said.
“I do not talk much about this and prefer to focus on being back with family and at a job I love; however I will say that this experience has changed me forever.”

Paeroa op shop to give back after fire