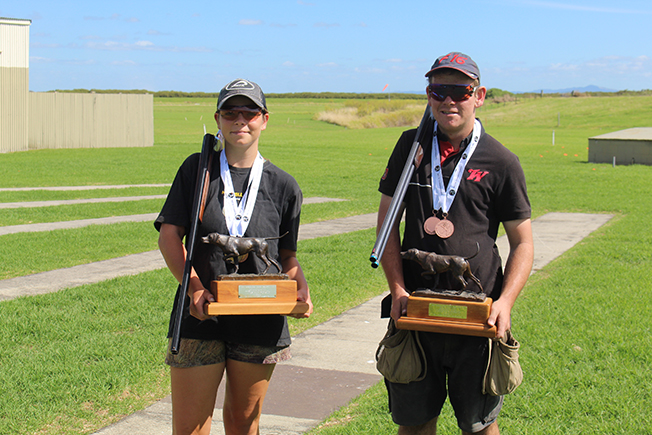 The talented duo of Ashling and Graham Welch have retained their national titles in clay target shooting, making them the sport’s top young competitors in the country.
The siblings attended the NZ Sporting Clay Target Shooting National Championship at Hamilton last month, with the North Island champs on February 11, and the nationals on February 12-13.
Ashling, 17, retained her winning title in the NZ Ladies championship, while her older brother Graham, 19, kept hold of his NZ Junior title.
The wins mean Ashling holds the South Island, North Island, and New Zealand Ladies titles, while Graham holds the South Island, North Island, and New Zealand Junior titles.
They were also in the North Island mixed team, which came first against a shoot-off against the South Island.
It was a feat their dad Andrew and mum Carmel thought was “absolutely fantastic”.
“They’re both very determined and they both practise hard,” Andrew said.
Clay target shooting is a sport that involves shooting a firearm at special flying targets. It took great hand-eye co-ordination to excel at it, he said.
The Waitakaruru family practise at Thames Clay Target Club every Wednesday afternoon, and are also all part of the club’s committee.
“Gun sports are frowned upon a bit… but if people want to learn to shoot, [the club] is a great place to come and learn. They’re taught all the safety aspects and how to do everything properly,” Andrew said.
“Both of my kids agree that the more people that do it, creates more competition.”
Andrew said there was still plenty people could learn about clay target shooting. He wanted to see the sport grow in New Zealand, and hoped his children could one day lead the charge. There was no reason for the sport not to have world champions hailing from New Zealand, he said.
“[New Zealand] has never had a world champion or anything like that, but we’ve had some very good shooters.
“We’re hoping that maybe later this year, or even the following year, we could look at going to a Worlds, but it’s just so hard with travel at the moment.”
As a duck hunter, Andrew started the sport of clay target shooting after years of racing motorbikes left him with a few injuries. He told The Profile his children were now shooting better than him.
“They both beat me at the North Islands, and everyone was giving me stick… I don’t like them beating me, but I was proud as punch that they did so well.”
The Welch siblings have also qualified to shoot for the NZ Junior team at the Oceanias in Australia in April.
DETAILS: To find out more or to get involved in the sport, call in to the club at the back of Thames Airfield on Wednesday afternoons.

Harsh conditions prove too much