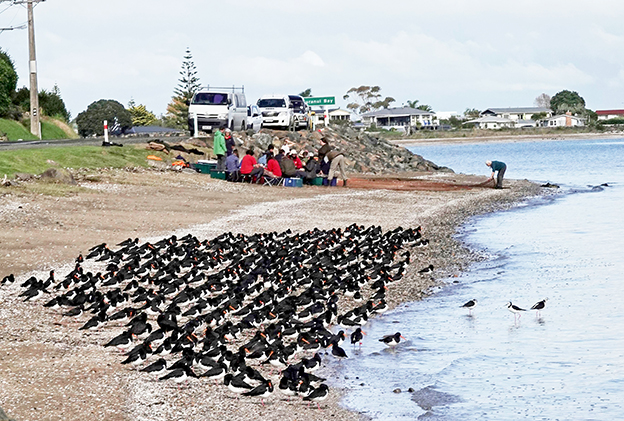 DOC caught and tagged the protected oystercatchers at Kuranui Bay last year to find out more about the birds to better protect them. File photo: SUPPLIED/DOC

A flock of protected native birds were killed by an inexperienced student pilot at Thames Airfield last week during a “touch and go” landing.
The Department of Conservation told The Profile 22 South Island pied oystercatchers were killed when struck by a plane taking off at the airfield on either the evening of February 15 or the morning of February 16.
Often seen roosting on the beach at Kuranui Bay, just north of Thames, the oystercatchers are a protected native species under the Wildlife Act 1953 and have a conservation status of “declining”.
DOC Hauraki operations manager Avi Holzapfel said rangers identified the dead birds as South Island pied oystercatchers when driving around the edge of the airfield on February 17.
“DOC accepts the plane striking the birds was an unfortunate incident and pilots do all they can to avoid striking birds,” he said.
The oystercatchers began roosting there recently and hadn’t done so in previous years, he said.
“The oystercatchers are known to roost at high tide on grassy areas of the airfield and neighbouring rugby club.
“We plan to work with the council and aero club to look at measures that could deter oystercatchers from roosting there and reduce the chances of planes striking the birds.”
Hauraki Aero Club caretaker Roger Wilson said the incident happened when a student pilot, who he believed was from Ardmore, briefly landed on the runway then took off again without stopping.
“This was a young student pilot who wasn’t aware or hadn’t asked us, and he came in and apparently did a touch and go instead of just stopping, back-tracking and then taking off where the area would be clear,” he said.

“He was inexperienced and so what happened is he literally did, unfortunately, at low level he actually flew into them.
“From time to time, we do get birds that settle on the runway. We’re well aware of that and we know how to work around it because they congregate in various parts and we can work our way around them.”
Nobody was injured in the incident and the plane suffered minor damage, which was repaired at Thames Airfield before flying home, he said.
Pilots landing at the airfield knew to avoid the areas where birds were roosting, which meant bird strike seldom occurred, he said.
“It’s only at certain tide times and certain times of the year that we have this proliferation of birds,” he said.
“The birds usually congregate en masse at various parts and there’s nothing we can do – if we shoo them off, they turn round and come back again.”
Birds on airfields were an international problem, he said.
“There’s not much we can do about these incidents. We try and avoid them and… normally we’re successful but occasionally there’ll be an accident.
“No-one likes to do that and the other thing of course, it’s quite dangerous if you hit birds because it can stop an engine.”
Thames Coromandel District Council, which owns and operates the airfield, has updated the Thames Airfield Aeronautical Information Publication (AIP) to warn pilots of the new roosting behaviour two hours each side of high tide between January and April.
Council operations group manager Bruce Hinson said council was concerned about the bird strike incident.
“Council is always focused on the safety of aircraft, as well as, at this time, the welfare of the birds. However, as the birds are protected we can’t cull them,” he said.
“The Thames [AIP] already warned pilots that birds are present – the updated AIP will provide them with more specific information allowing them to time their flights accordingly.”
In June last year, DOC researchers caught and tagged oystercatchers at Kuranui Bay in a joint project with Landcare Research, Birds NZ and the Pūkorokoro Miranda Shorebird Centre. The aim of the project is to find out more about the birds in order to provide better protection because of their declining numbers.
Before being safely released, 115 of the birds were fitted with red tags and 22 were fitted with solar-powered tracking devices connected to a mobile phone.
Oystercatchers breed in riverbeds and farmland in the South Island and then, as winter approaches, they fly in their thousands up to warmer places like the Firth of Thames.
More information about the species can be found at nzbirdsonline.org.nz/species/south-island-pied-oystercatcher.