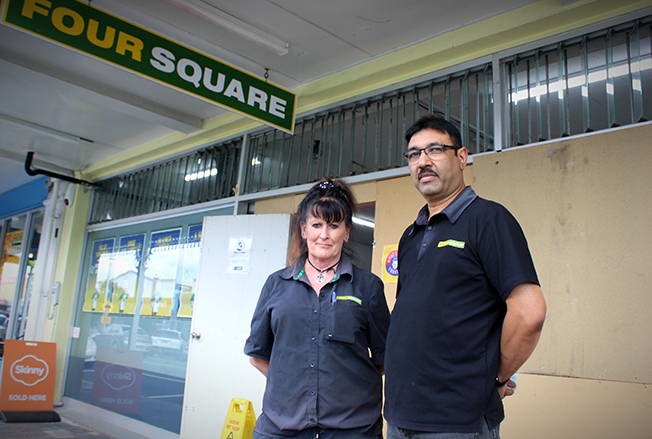 Along the main roads of Paeroa and Thames there are signs of criminal activity.
An electronics store is getting its main entrance repaired after a holiday season smash-in; a superette and an antiques store are boarded up thanks to a spate of lawlessness; and the workers of a liquor store in Paeroa’s south are working out how to strengthen their security.
Manbir Kaur owns Super Liquor Paeroa and works there alongside her sister Kiran.
They were the targets of an attempted break-in one Thursday morning recently around 3am, when five youths wearing hoodies tried multiple times to gain entry by smashing the front entrance.
“They were using their legs, using their arms, and then they used, like, a steel frame to try and break it,” Manbir tells The Profile.
“It’s just shocking. They’ve got no right to go on to anyone’s property and cause any damage. They came with the intention of theft but we’re lucky the motel [worker] across the road basically chased them away.”
A box of beer was delivered to the motelier to say thanks but Manbir and Kiran, who only took over the business in October last year, have intentions to strengthen their security to ensure it doesn’t happen again.
“It’s really hard actually,” Kiran says, “you’re paying for your own safety.”
Over at AA Antique Furniture in Paeroa’s main street, there is a reasonably-sized smash in Adam Archer’s front window, but he doesn’t expect the instigators were after any of the items inside.
“They didn’t steal anything, and they could have, but there’s no point in them trying to steal this sort of stuff because it’s worthless to those sorts of people,” he says.
“It’s not alcohol, it’s not cigarettes, it’s got no value to them, so it’s just straight out being idiots.”
In Thames, cigarettes appeared to be the motive behind a break-in at Nalin and Rasella Patel’s Four Square superette. It was the first ram raid-style attack in their 22 years of trading in the town.
Four male offenders, seemingly adolescents, smashed their way through the main entrance in order to steal cigarettes, Nalin says.
“They took stuff, but they didn’t get what they came for.”
The couple say the police didn’t arrive until four-and-a-half hours later, and even then, they had shown up to deal with another dispute.
“In our case, the kids were young, so I don’t know if they put any effort into catching them.”
According to Waikato Police, more than 50 arrests of people aged 12-18 years old have been made since February 1 throughout the Waikato region, and more than 500 vehicles have been stolen.
A number of the vehicles have then been used in other offending such as ram raid-style burglaries.
Nalin and Rasella fear that without a stronger police presence in Thames, crimes committed by youth will continue to take place in the town.
Their sentiments are shared by 98 per cent of poll-takers of a crime survey run by the Thames Business Association, with feedback stating businesses would like to see a manned police station in town.
According to the survey, more than 52 per cent of respondents had experienced an increase in crime in their business in the past two years, while 32 per cent said they had been a victim of crime.
“We don’t deserve this. We work hard seven days a week, and you try to help the community in these Covid times and then they come and do this,” Nalin and Rasella say.
“People are going to give up calling the cops. They want us to report even the little thefts people do, but what’s the point?
“Instead, we try to catch them in the shop and get the property back… because by the time we ring [the police] and answer their questions, the driver who stole the things would’ve gone already.”
Businesses throughout the two towns believe property crimes “get lost in the woodwork”, and a stronger approach to offending youth is needed.
Waikato Police has set up a dedicated team to investigate this type of offending and are taking a “district-wide” approach.
Waikato Eastern Area commander inspector Dean Anderson tells The Profile that young offenders are highly motivated and move around the district.
He says police are actively involved in youth-focused prevention activities in the Waikato Eastern area, which prioritises early intervention with youth who have a potential to reoffend or are simply in need of support.
“Our response to youth offending is in accordance with New Zealand legislative frameworks such as the Oranga Tamariki Act 1989, which dictates how we will proceed and progress with children and youth through the youth justice process.
“That being said, rest assured where we find repetitive offending – the offenders will be held to account.”
Inspector Anderson says police have always operated within a “highly dynamic and challenging environment” and need to prioritise incidents where people may be in physical danger.
“This, on occasions, can delay our responses to property-related offences when an offender is no longer at the scene,” he says.
“Our intention has always been to deliver the best service we can for the public. I can assure you all of our staff work hard to do the very best for their communities.”
He encourages businesses to continue reporting incidents of crime, in order to identify, arrest, and prosecute adult offenders, and refer youths through the Youth Justice process in the area.
“We would always encourage people to report this offending to us – even if police are not able to attend immediately, there are often forensic and other investigative avenues available to us which allow us to follow through and hold people to account.”

Marine precinct minus mangroves gets approval