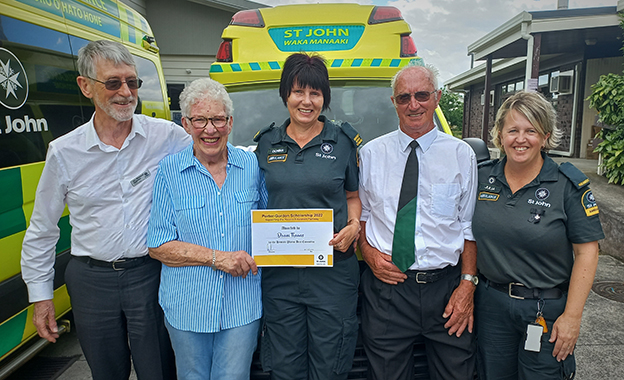 A part-time paramedicine student and member of St John Thames was “elated” after receiving a new St John scholarship.
Donna Thomas, who’s currently an emergency medical technician at St John Thames, received the Porter-Gordon scholarship in December last year.
The new scholarship, named in recognition of two lifelong Ngatea St John supporters, Lesley Gordon and Dave Porter, supports St John’s Hauora education pathway.
Donna, who is also the volunteer manager for Maramarua St John, told The Profile she didn’t think she’d receive the scholarship because she might’ve been “too old”.
“Most people who study these days are younger and I’m 48,” she laughed.
“But whatever age you are, you should just do what you want to do.
“I knew I wanted to be an ambulance officer when I was seven…and this scholarship is really going to help me heaps.”
The scholarship covers 75 per cent of community health students’ course costs and Donna said the costs of her paramedicine papers this year were around $8000.
“So when I pass, [the scholarship] will pay 75 per cent of that for me, which is great,” she said.
Donna joined St John as a volunteer in Maramarua and Ngatea seven years ago while she was a fire performer and caring for her father, which she did for 18 years.
“Then they put me through my courses and I became an [emergency medical technician] and then two years ago I got a full time job at Thames Station,” she said. “From there my manager said I should do my paramedicine as I was more than capable… and I thought ‘why not?’ because I love learning and would be able to give more life saving skills within the community so I went for it.”
Donna said she still interacted with everyone at Ngatea St John.
“In the Hauraki district, we’re a lot like a big extended family and I’ve made some really close friends since joining St John,” she said.
Ngatea Station was also where Donna was presented her scholarship by Hauraki Plains area committee chair Richie Saunders on December 9.
On the same day, the station also celebrated the graduation of 35 new recruits from an innovative training programme put together by Ngatea paramedic, Julia Te Huia.

‘So much love’ shown for Tonga