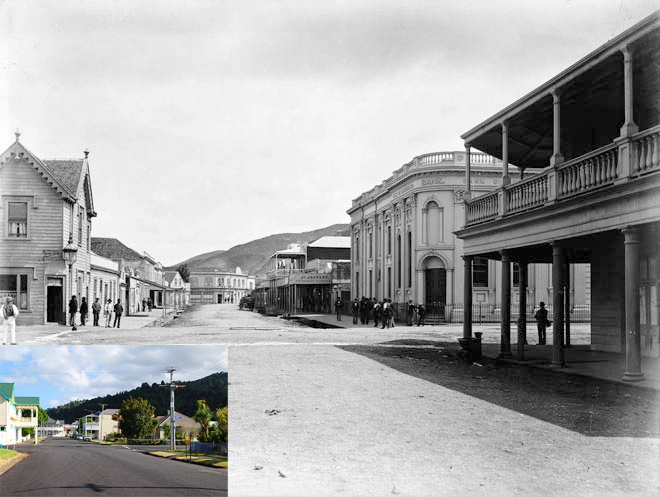 Scrip Corner, the verandahed building on the right, corner of Albert and Brown Streets, opposite the Bank. (INSET: The corner today) Photos: SUPPLIED

Scrip Corner
One of the wildest panics that seized Thames happened at its famous Scrip Corner – a stock exchange in a block of offices at the corner of Albert and Brown Streets, at the Grahamstown end of Thames.
When Thames mines were producing gold by the ton, Scrip Corner was the scene of financial ferment – the whole block being occupied by sharebrokers’ offices and the footpath crowded from morning till night by hundreds of people buying and selling mining shares.
Almost hourly, rumours and reports spread that gold had been struck and thousands of shares changed hands. Small fortunes were made and lost and there was a rush for the Thames Advertiser, the morning paper, and the Thames Star, the evening paper, to see the latest mining news.
In 1871, great alarm was caused at the Corner, not by a gold discovery, but by a horse tearing down the footpath with bridle and saddle flaps and stirrups flying. The Corner was crowded and the speed with hich coat tails were spread out horizontal in the air was a sight to be remembered.
By 1879, the glory days were fading and when the bell calling brokers together at the Corner sounded, people looked to the fire brigade for explanation rather than to the stock exchange. Fire though did bring a throng once more to the Corner in 1928 when the old stock exchange building caught alight.
One of the largest crowds ever seen in the street since it was known as Scrip Corner assembled, but soon dispersed when it was seen that the fire was under control. Two years later there was amusement at the old Corner when two schoolboys riding their cycles along the footpath towards each other collided.
They both promptly sparred up and a little two round fight was only stopped when each had a bloody nose. A change of name to ‘Scrap Corner’ was suggested.
As time passed, many of the mining companies moved their legal offices to Auckland and the Auckland stock exchange became the chief centre of the dealers in mining scrip. Nevertheless, a fair amount of business was still transacted at the old Corner.
In 1910, the block of buildings had been purchased by Albert Bruce, who was secretary to the Thames Harbour Board, the Thames Jockey Club and other organisations, who used the offices on the Corner for many years.
In 1930, the block was sold for removal, pulled down and taken to the Hauraki Plains. Scrip Corner became but a name.
This march of time sweeping away Thames heritage was poignantly observed by a Thames Star reporter – “Though Thames has changed its appearance, it has not changed its heart, and, in an ever-changing world that, after all, is the thing which really counts in life.”