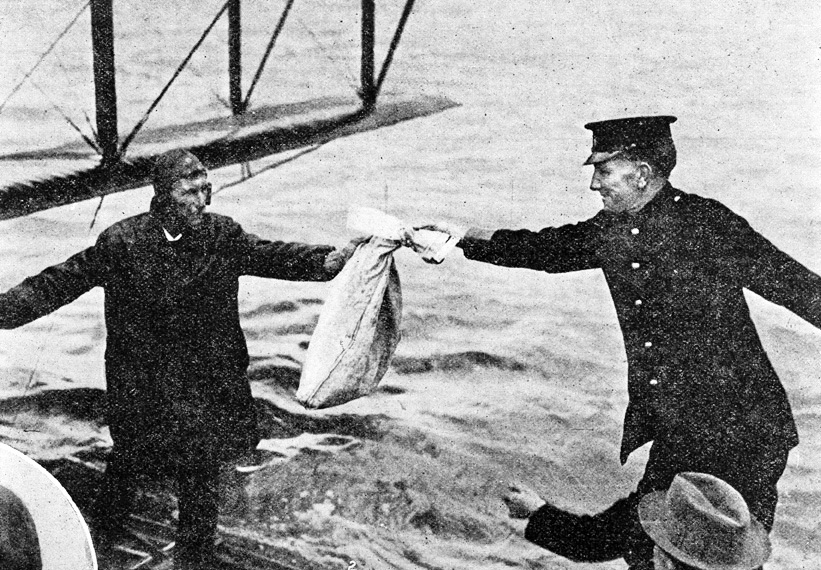 1920
A seaplane arrived at Kōpū from Auckland on an unofficial visit to spy out the land and water for suitable landing places for the first aerial mail service to Thames.
There was some indignation that the postal authorities had kept the matter quiet and many did not see the plane arrive.
Word had passed by the ‘bush telegraph’ that the plane was due about twelve and little knots of people gathered on the waterfront. About 12.10 the sea plane was visible flying fairly high, and was in plain view about 10 minutes, when it dropped easily down into the Waihōu, running up to the wharf at Kōpū, the average speed of 60 miles per hour being maintained for the journey. The pilot said the machine was a 120 hp 2-float seaplane of American type.The trip down had been very pleasant, and there were no difficulties in the way of a regular seaplane service between Auckland and Thames. The flight between Auckland and Kōpū took 50 minutes.  It was intended to run a regular seaplane service between Thames and Auckland for mail and passengers. The pilot was met by the Mayor, the secretary of the Harbour Board, and board members and was taken to Burke St wharf, and later to Tararu with the object of finding a suitable site for a permanent landing stage.
Around 500 settlers and residents of the Hauraki Plains petitioned the government to reserve an area of about 43 acres, known as the Kerepēhi racecourse, for the newly formed Hauraki Plains A and P Association.
Kerepēhi, the venue of the show ground, was situated at the junction of the Awaiti Canal and Piako River. The growing township was on undulating land, and on the highest point for a radius of seven miles.
Kerepēhi was the port of the river steamers and cargo was carried from there to the upper reaches of the Piako by launches and punts. The committee intended to hold a show early in 1921.
Hikutaia, a wayside country happy-go-lucky village, had been settled even before Paeroa, but was in much the same position it had been 40 years previously, except it could now boast an up-to-date stock sale yard and a cheese factory.
Hikutaia possessed the cream of the dairying land of the Thames Valley but no attempt had ever been made to create a township, despite its central situation and flourishing surroundings.
Its outskirts had improved in population by farm settlement, but local settlers appeared to think that a half dozen small business premises was quite enough. However, Hikutaia was one of those small centres that clearly demonstrated the importance of a well-conducted licensed house.
It was an acknowledged fact that it was Mrs Corbett’s Pioneer Hotel that kept Hikutaia from sinking into oblivion.