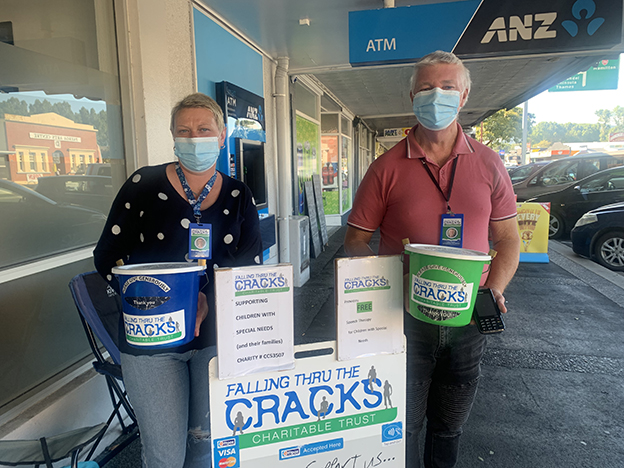 Kirsty and John collect for Falling Thru The Cracks on the main street of Paeroa. Photo: TERESA RAMSEY

A 15-year-old boy who’d been expelled from three schools is one of 11 Paeroa kids Falling Thru The Cracks Charitable Trust have helped over six years.
The trust, which was established in Whanganui in April, 2016, fundraises to pay for children’s private psychology sessions and speech and occupational therapy.
The trust’s treasurer and secretary John, who didn’t want to use his surname, told The Profile the trust began helping Paeroa youth in November, 2016, after seven of their trustees shifted to other North Island areas.
“A family may come to us with an autistic child who’s non verbal so we get a speech therapist to go and work with the child and the family,” he said.
“Or a family may come to us and say their child has some real behavioral issues, so we get the psychologist to come and work with them and try and get to the bottom of why they have the issues.
“The families are very grateful.”
John said one of the Paeroa children they’ve helped has gone through speech therapy for five years, and the first one they helped benefited from psychology sessions.
“We were sitting outside the Countdown fundraising and this lady came up to us and she was quite distraught and we asked her what the problem was,” he said.
“She then told us a story about how her 15-year-old son had been kicked out of three schools and she was at her wits end.”
John said the trust then got their psychologist to work with the boy and after six sessions he was able to return to school.
“We were talking to the mum about two years later and the boy had passed NCEA Level 1 and 2, he fitted in and he was awesome,” he said.
“Having those six sessions of psychology had put him on the right track.”
John said the boy now works full time on a farm in the Waipa district and he loved it.
“It makes you feel good when you hear those success stories,” he said.
The trust, which also helps families in Thames, Te Aroha and Waihī, is currently helping four children from three Paeroa families, mainly with speech therapy.
John said Covid-19 had made their work difficult.
“At the moment it’s been hard because it’s mainly Zoom and Skype meetings but prior to Covid, the therapist would come to Paeroa from Tauranga and work with the children face to face and help with their speech therapy,” he said.
John said the trust also couldn’t fundraise outside their normal spot at Countdown Paeroa due to Covid-19 restrictions so they had been fundraising outside places like Paeroa’s ANZ bank.
The other day they raised just under $400 in four hours.
“At the front of a supermarket we can normally [fundraise] an average of $170 or $180 an hour,” John said.
“The speech therapist costs are $80 plus GST per hour and a psychologist costs $170 per hour.”
“So it’s big money but the public are very generous…and we’re so grateful.”
John said the trust was also grateful for the people who had transported children in need to Tauranga when the psychologist couldn’t travel to Paeroa.
DETAILS: For more information or to make a donation to Falling Thru The Cracks, visit: fallingthruthecracksct.org.nz.