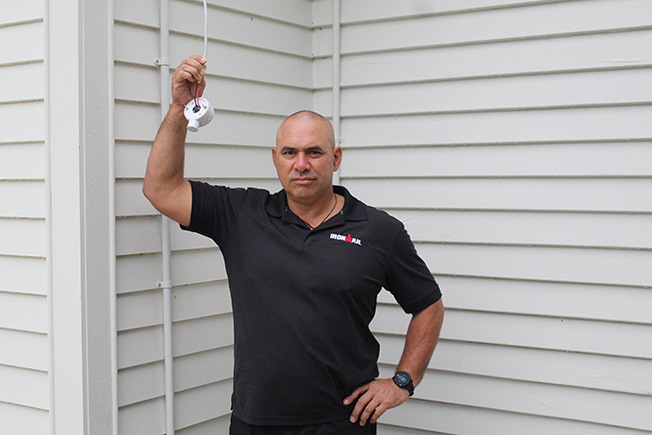 “Absolutely gutted” was how one principal felt after discovering his school’s brand new speakers were stolen.
Hikutaia and Thames South School became targets of theft in recent weeks when their outdoor speakers were stolen in the black of night.
Hikutaia School principal Wayne Whitney told The Profile the five stolen speakers – worth $2000, had only been installed the day before as part of a new $90,000 fire, smoke alarm and intercom system.
“To find out they were gone was gutting,” he said.
“It’s stealing from our kids and the safety of our kids as well… so it’s terrible.”
Wayne said parents reacted the same way to the speaker theft.
“I put a message out to our community on our Facebook page to inform our community what’s happened,” he said.
“I’ve had parents approaching me when they were picking up their kids and just saying how terrible it was to have this new system put in and all of a sudden gone.”
Wayne said the school noticed the speakers were missing when his students couldn’t hear the school bell.
“We were like why aren’t they coming in? So I said hang on, I’ll just take a quick look around the school and sure enough I noticed the speakers were gone,” he said.
Wayne said this was the first time the school had an incident like this in many years.
“We’ve been very fortunate, we’ve got a great community who come and use the school after hours and respect the place and that’s why it’s so out of character and why the community are feeling it as well,” he said.
Wayne said the school would continue allowing the community to use the school after hours.
Wayne believed the offenders had the gear and equipment to get into the spaces and take the mounts off the school’s walls.
“In some cases the whole brackets are gone, professionally cut, unscrewed and taken away, and one’s been ripped off,” he said.
“There was nothing else taken or damaged, they were just in, took the speakers and gone again.”
Wayne said he looked through the school’s security footage but couldn’t detect anything. He had contacted Police and insurance, and had reordered new speakers with cages.
Thames South School Board of Trustees chairperson Michael Barlow said the school was devastated by the theft of three of their speakers.
“It’s not the first time that they’ve been taken. Over the course of five years, we’ve had nine speakers stolen from the school,” he said.
“We rely heavily on the speakers on a daily basis, they serve the school bell, fire and smoke alarm and PA system.”
Michael said it looked as though the offenders also had the correct tools to remove the speakers “so they can use them elsewhere”.
The school got security footage of the offenders but it didn’t show their faces.
“It shows them backing up towards the camera so they obviously know where the cameras are, and as soon as they got under the camera, they would’ve been able to climb up and grab the speakers,” Michael said.
In a statement, Police said they were making enquiries into the speaker thefts at both schools.
Police encouraged anyone with information to call 105 or Crime Stoppers anonymously, Ph 0800 555 111.