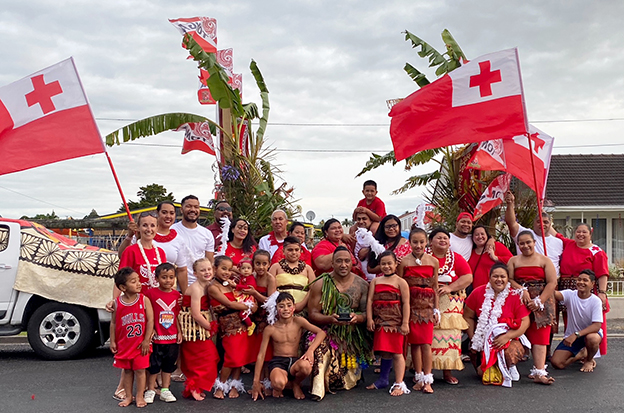 The Tongan community have been so taken aback by people’s donations following the devastating Hunga Tonga–Hunga Ha’apai eruption, that its president has had to “slow them down” in paying it forward.
The January eruption and subsequent tsunami killed three people across the island nation and completely destroyed structures and plantations.
Tongan community president Alby Tukia said fundraising to aid his home country’s relief efforts was “ticking along nicely” – thanks to the love from people around Thames and Paeroa.
They’ve so far raised $6000, with the hope of gathering enough donations to fill a shipping container with food to send to Tonga for those in need. And an evening of traditional Tongan food and entertainment planned for the end of the month should get them across the line.
“We’re hoping to get $20,000 from the two dinners which will definitely do the job,” Alby said.
“But the job isn’t just about sending the container home to Tonga. It is also kick-starting the Tongan community here in Thames and Paeroa; what else we might be able to help with.
“We will use [the money] wisely.”
The event, called Pō Ula, will feature cultural performances, auctions, guest speakers, including New Zealand Olympic weightlifter David Liti, and a Tongan multicourse feast prepared by professional chefs.
“It’s a Tongan experience… and we all know that when you go to the islands, you experience the island food,” Alby said.
Menu items on offer will include raw fish, taro, yam, a Tongan dessert, and a roast pig.
“We’re big people and we love our food,” Alby joked, “we’re just sharing the culture and entertainment and hope everybody else will come to join us.”
Throughout the Valley, schools, businesses, and members of the public have rallied to support the tsunami relief.
This includes nine-year-old Matatoki School student Chelsea Cooper, who raised more than $700 for Tonga by creating and selling concrete cactuses. Also, Thames High School pulled in $577 from its swim carnival in February, while Pārāwai School raised $555 in support.
The community also sold hundreds of plants and hand-made bead accessories, and Alby said they could not wait to “pay it forward”.
“I have to slow my Tongan community down because they just want to give the [donations] back straight away.
“They want to go and say thank you, because when people give so much love, we feel like we need to return it straight away. We’re trying to learn the value of giving it back in a different way,” he said.
“Because if the people give out that much, myself and the Tongan community have to be aware of using that in a beautiful manner to give back to the community.”
DETAILS: Pō Ula, a night of food and entertainment, Paeroa Memorial Hall on March 26, and Thames Civic Centre on April 2, 5:30pm to 8pm. Cost $100pp, limit to 100 people each night. To book, email bookpoula@gmail.com. Vaccine passport required.