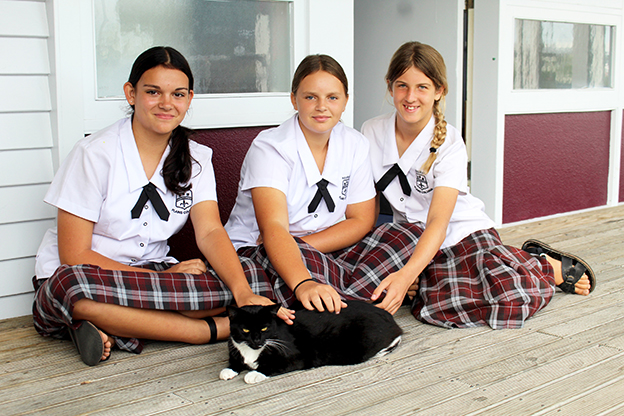 Urgent veterinary treatment was the catalyst for Max becoming the official Hauraki Plains College cat.
Teacher Brian Woolcock, who spent a lot of time with the black and white feline, told The Profile Max had wandered the college grounds for five years but only recently became the official college cat after they wanted to treat an “ugly” abscess on her neck.
“One of the school counselors said that looks really bad, she needs to get to a vet,” he said.
“So we decided we’ll get somebody to pay for the vet fees but we needed to get permission from the owner who lived across the road.”
Brian said the owner was “quite happy” for it to happen and said if the school wanted to be responsible for Max’s treatment, the school could keep her.
The college soon announced on Facebook Max was the official college cat and set up a food fund for Max, which has so far raised more than $340.
An anonymous donation of $90 paid for Max’s veterinary treatment and the treasured female feline is now on the mend.
Brian said Max had developed a habit of coming into his office each morning to feed and sleep.
“One holiday I was [in the office] and she sprang on me while I was sitting down to draw attention to the fact she wanted some food, so I fed her and now I can’t get rid of her,” he said.
Brian said the students were fond of Max being around the college.
“In learning support we have kids who may be a bit anxious and we had a student last year who you couldn’t get to talk,” he said.
“But one day she looked through the window and saw Max sitting on the chair and I opened the door and she walked in. Without having said anything to me for about six weeks, she stroked the cat and said: ‘I really like cats, I’ve got one at home’.
“So it gives the kids a focus and if they’re feeling under the weather, the cat’s almost like a therapy animal.”
Brian said the college had posted photos on Facebook of Max around the school including a “very neat one” staff member Amanda Fitzpatrick took of her sitting on the stage staring at the crowd during one of the college’s assemblies.
Photos of Max also included her in the bus bay, on top of a photocopier and sleeping on top of a bookshelf.
Amanda said Max even managed to set off the college’s fire alarm during the summer holidays.

Marine precinct minus mangroves gets approval