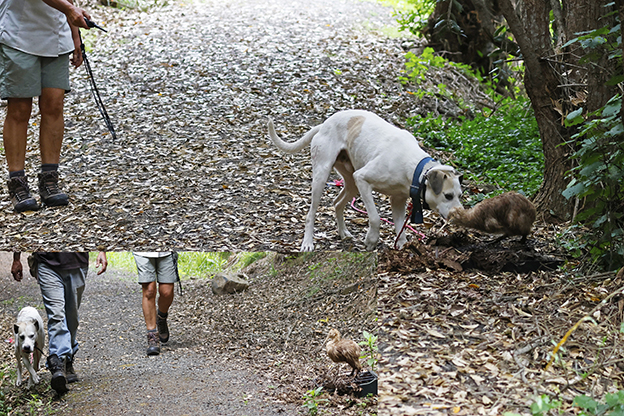 TCKC volunteer and photographer RACHEL HOLMES captured the essence of the training process with a before and after photo.

Twenty-four dogs were taught how to avoid attacking our national icon when Thames Coast Kiwi Care (TCKC) held its annual summer kiwi avoidance training in Te Mata recently.
Run with the support of the Department of Conservation, trainers Christine Friis and Sheila Westley underwent first-time and annual refreshing training with a mix of canines.
TCKC co-ordinator Sheena Beaton told The Profile individual collars were fitted around the dogs’ necks before they were led by their owners past a taxidermy kiwi.
Fresh kiwi droppings and feathers, all freshly collected from the Kiwi Encounter hatchery in Rotorua, were placed around the imitation kiwi to ensure the strong, distinct smell of the native bird was present.
If a dog showed an interest in the kiwi, a short shock was administered by the trainer, with the size of the shock customised to the size and temperament of the individual dog.
It was then taken off its lead and walked with the owner past the kiwi again.
“Usually, the one shock is enough to deter the dog from going anywhere near the kiwi, and they give it a wide berth,” Sheena said.
“If the dog shows interest again, they will get another shock and the process is repeated.”
Sheena explained that if dogs were kept under strict control, kiwi avoidance training was an effective tool for helping prevent dogs from attacking kiwi, but it was not a “silver bullet solution”.
“The smell of kiwi is irresistible to any dog, big or small, and just one investigative bite or push against a tree can easily crush the fragile breastplate of a kiwi.
“All dogs need annual refresher kiwi avoidance training until they are showing strong avoidance, and then they only need a return training after two years.
“All dogs, even [trained dogs], should be kept on a lead in areas known to have kiwi.”
Mustelids, including stoats, ferrets, and weasels, are the number one killer of kiwi chicks under 1kg.
Kiwi protection projects such as Thames Coast Kiwi Care spend volunteer time, money, and effort to trap out these kiwi predators; however, dogs are the top killer of adult kiwi. Sheena urged all local and visiting dog owners to get their dogs trained every year and to keep their dogs under control within the project area in Te Mata, which includes the suburban areas of Bennett Rd and Te Mata Creek.
For info, visit: www.thamescoastkiwicare.org.