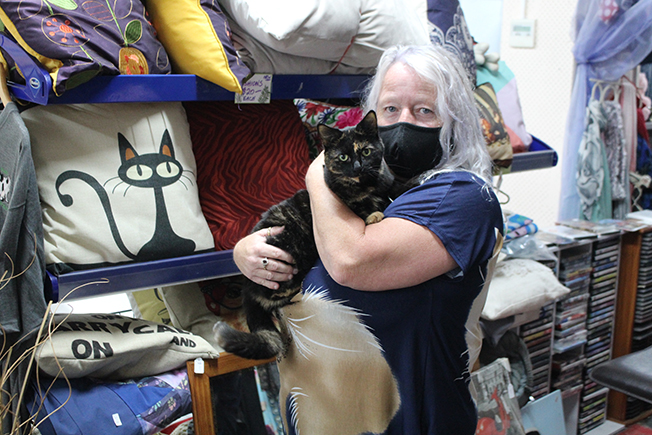 A lifelong love of cats was the catalyst for Maggie Andreassen to begin her Waihī cat feeding and rehoming journey.
Maggie is a recent recipient of Hauraki District Council’s OnYa community award for her work keeping stray cats fed and desexed, along with fostering cats in her Seddon St charity shop, Waihī Town Cats, until they’re rehomed.
Maggie, who moved to Waihī from Maramarua when she was 14, told The Profile receiving the award was a “good surprise”.
“I wanted to honour all the lovely volunteers of trappers, feeders and volunteers in the shop who’ve helped me,” she said.
“I want to give a special mention to Victoria Dauphin from Whangamatā Cats… she’s been a blessing, my angel… without her help, [opening the shop] wouldn’t have eventuated.
“She’s helped in so many ways with donations and food.”
Maggie, who currently owns five rescued cats and five kittens being tamed, said she began feeding Waihī’s town cats in 2017 after Hazel Stewart, who’d fed them for around 50 years, hurt her hip.
“I’m pretty sure it was her daughter, she came to me and said would you like to feed the town cats while my mum recoups, so I said yeah that’s fine,” she said.
Maggie said she currently had five feeding stations across Waihī where she and a volunteer provide food for the town cats.
“The cats have got to be fed, they need food everyday, I can’t see any animal starve,” she said.
“Because they weren’t being fed, they’d come into town and be annoying for the businesses but because they’re being fed they stay at the back [of the shops].”
After beginning to feed the town cats, Maggie then raised around $340 through online donations to buy a cat trap, which she uses to trap, desex and release town cats through New Zealand’s trap-neuter-return programme.
“Since I was a child, I’ve loved cats and to see pictures on Facebook of cats not being looked after, I thought there was a need in Waihī – especially behind the shops, because they were breeding prolifically,” she said.
“I’ve probably desexed over 30 cats now. If I hadn’t, there’d probably be at least 1000 cats.”
Maggie said a majority of the public had been grateful for her desexing programmes.
“If you breed a cat and dump it, they catch cat flu, feline AIDS, and that can be passed on to another cat that gets bitten,” she said.
“So I would recommend if you get a cat or kitten, desex it, it gives them such a better life and stops all these diseases.”
Maggie’s cat feeding and desexing led to her opening the Waihī Town Cats shop in 2020, where she also provides these cat services and cares for cats until they’re rehomed.

“For two years, I was travelling from Waihī to Paeroa and running a shop called Market on Main, and the owner sold the business and for a few months… I was just selling online to raise money for the cats,” she said.
“Then I went to [Waihī shop owner] Mike Reehall and said ‘what are you doing with the back of your shop?’ and he said nothing and I said ‘well, can I open a little shop here?’ and he said yes, and on Christmas Eve, 2020, I opened.”
Maggie said charity shop donations went towards vouchers for cat owners, cat food and vet bills, and she encouraged more people and especially businesses to support her.
“I’ve asked on the Waihī Town Cats Facebook page for more people because at the moment I only have one volunteer who feeds Tuesday nights for me and the other six nights I’m doing it,” she said. “Help me by donating a bag of biscuits, some canned food or sponsor me with the running of my car.”

‘We don’t deserve this’