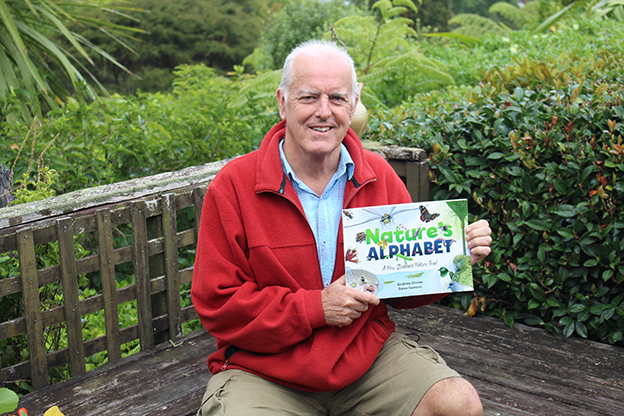 A Thames author who has published more than 40 New Zealand nature books hopes his “multi-layered” newly republished book engages with both children and adults.
Andrew Crowe, who has lived in Thames for 15 years, republished his book Nature’s Alphabet due to popular demand, with additional te reo Māori and fresh designs for a new generation of Kiwi kids.
Andrew said the book was first published 25 years ago and was shortlisted for the New Zealand Post Children’s Book Awards in 1999.
“We’ve added Māori words like aihe, which is Māori for dolphin, which was not in the original book, so you could even compare the two and see the extra artwork and text,” he said.
“In the original edition, we had the original Māori alphabet like Ng and Wh… but now we’re adding macrons, which weren’t used a lot in schools.
“Teachers would say children wouldn’t understand what a macron is and it’s significance, but now that more schools are teaching Māori it’s easy to add those things.”
Andrew said his new book also helped children learn the alphabet.
“On one page you’ve got A is for albatross and there’s other things in the picture beginning with the same letter,” he said.
“You’ll have ants walking across the page so a child can see ants begin with A as well and there’s a list on the back with all the things on each page.”
Andrew also hoped the book also engaged adults.
“I like to have enough new information that an adult may not know so they can share their sense of curiosity, explorations and sense of enjoyment of the book so they and the children can share the same experiences,” he said.
“That’s the philosophy I’ve had with a lot of the children’s books I’ve done.”
Andrew told The Profile the first book he wrote after moving to the Coromandel Peninsula was about New Zealand’s edible native plants.
“That came about after getting lost in the bush and learning how to survive and then [later] experimenting with living in the bush eating native berries and leaves,” he said.
“Then people would say why don’t you write a book and I’d say I wouldn’t know how to do that so I had a go and I enjoyed the process and just carried on writing books.”
Andrew said over the years he’s enjoyed being in schools and seeing kids reading a book in front of their class for the first time with one of his books.
“They’re able to do it because it’s a very simple language but the content is interesting enough and they’re learning something.
“Those breakthrough moments are such an exciting and empowering moment and I loved to feel that I can be part of that,” he said.
Andrew said all his books had been about natural history for children and adults with one exception, The Dalai Lama Story, which involved meeting the spiritual leader in his North Indian residence.
“I went to Tibet as well for that book to learn more about his childhood and see the environment in which he was brought up,” he said.
Andrew said he was also working on a children’s version of his award winning book, Pathway of the Birds, which is about the skills Māori and their Pacific ancestors needed to find their way across the Pacific.
The children’s version will be illustrated by Puriri artist Rick Fisher and published later this year.

Harsh conditions prove too much