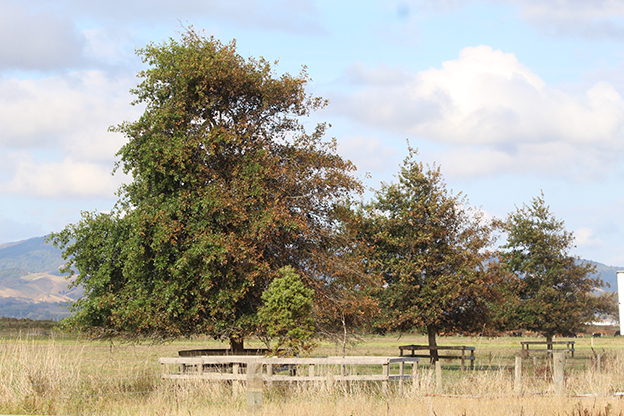 Trees on the Hauraki Plains are showing signs of severe damage weeks after ex-tropical Cyclone Dovi blasted the district.
The mid-February storm brought strong winds with gusts around 100km/h to many parts of the country, with a number of trees blown down on the Plains.
Several weeks later, thousands of trees throughout the Plains now have dead leaves on one side and healthy leaves on the other. The affected trees are mainly deciduous, such as poplars, maples and golden elms, but some evergreen trees, such as conifers, are also damaged.
A Hauraki District Council spokesperson told The Profile the trees affected were those in range of salt laden air blown from the Firth of Thames during the cyclone’s strong winds.
“Not all trees were damaged, those with thick waxy leaves remained undamaged,” she said.
The damage from the cyclone wouldn’t affect the tree’s long-term health since the damage was “cosmetic” and they would make a full recovery, she said.
“With autumn approaching, many of the trees will drop their leaves and in both cases [deciduous and evergreen], the fresh spring growth will not be affected.”
Council hasn’t received any service requests about the damaged trees but received service requests directly after the storm to remove fallen trees and clean up storm debris caused by the strong winds, she said.
NIWA forecaster Nava Fedaeff said trees by the coast could get saltwater spray but she couldn’t say how far it travelled inland.
“I also know places on the coastline may get salt water intrusion where the sea floods the area, bringing salt into the soil, which is no good for plants,” she said.
“But other than if you’re living right on the coast, the damage is mostly going to be from strong winds,” she said.
Nava said New Zealand currently experienced an average of one tropical cyclone per year, and NIWA expected there would be more intense tropical cyclones as climate change became more prominent.
“Changing rainfall patterns and more extensive dry spells can also affect some trees and vegetation,” she said.
“A lot of growers are looking into growing more plants which are more suitable for warmer climates.”
In its latest seasonal climate outlook, NIWA predicts temperatures are very likely to be above average from March to May. Marine heatwave conditions will likely contribute to elevated humidity and warm temperatures during March, delaying the seasonal transition to cooler temperatures during April and May.
Extended dry spells are likely, especially during March, and an elevated chance for atmospheric rivers and ex-tropical cyclone activity may increase the risk for heavy rainfall events later in March or early in April.