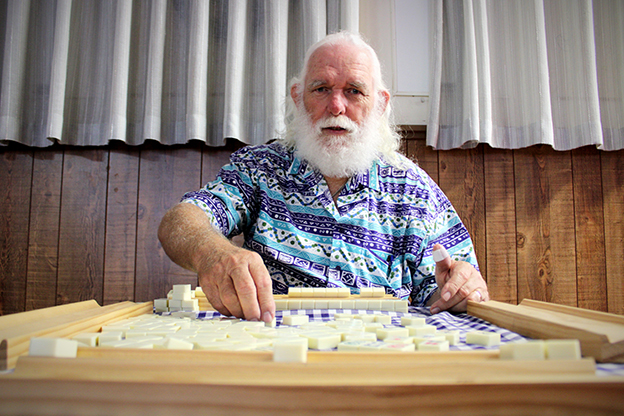 Roger Kennerley is gearing up to host a mahjong tournament in Paeroa. Photo: KELLEY TANTAU

Roger Kennerley’s passion for mahjong started with an unsuccessful game of scrabble.
“My sister was staying in town and she was right into scrabble, so I went down there to play with her and nobody else turned up,” he told The Profile.
“I knew a few people at the mahjong club and they said: ‘Come along here, give this a go’ – and I’ve never stopped.”
Mahjong is a tile-based game that was developed in the 19th century in China.
The game is played with a set of 144 tiles based on Chinese characters and symbols, but regional tournaments like the ones held throughout New Zealand have the ability to add their own unique hands.
Roger said it was essentially a “gambling game” – and it can be addictive. He knows of people who can stick with a game for 72 hours straight.
“It’s like what

gamers do these days,” he said. “In the old days, it was their first form of gaming, and in China, it’s still very much a betting game, and it can be very, very fast.”
According to a rule book in Roger’s trove, mahjong was likely developed in the late 1800s, and because the Chinese learned the game by watching play during childhood, there was no written instruction, nor recognised rules.
“It’s interesting because in China, it’s mostly a man’s game. Here, it’s probably 95 per cent women,” Roger said. “It is fairly tricky; there’s a whole assortment of hands you can play. There are recognised ones, plus, a tournament can make up a couple. You get extra points for doing those.”
The goal of mahjong is to make matching sets and pairs. In turn, players draw and discard tiles until they complete a hand to form four sets and a pair. A player can also win with a small class of special hands.
Roger, who has played the game for eight years, is gearing up to host a mahjong tournament in Paeroa next month – the first tournament of its kind in the town, as far as he is aware.
Set for March 26, the tournament will feature three sessions of games, with four players to a table, and because it will be held in the Paeroa RSA, all players must be double-vaccinated against Covid-19.
Roger said the tournament should be able to go ahead under the red light settings, as tables would be spread out, and less than 100 people would be attending.
“I’ve got people coming from Hamilton, Otorohanga, Tauranga, Whangamatā, and around the Peninsula,” he said.
“It’s a very social game, though when you’re concentrating you don’t get much time to chat.”
DETAILS: Mahjong Tournament, March 26 at the Paeroa RSA. Entry fee: $30, includes lunch at the RSA, and there will also be raffles available and trophies up for grabs. Any surplus funds raised will go towards the earthquake-proofing and renovating of the RSA building. If anyone is interested in taking part, phone Roger on: 027 272 4600.