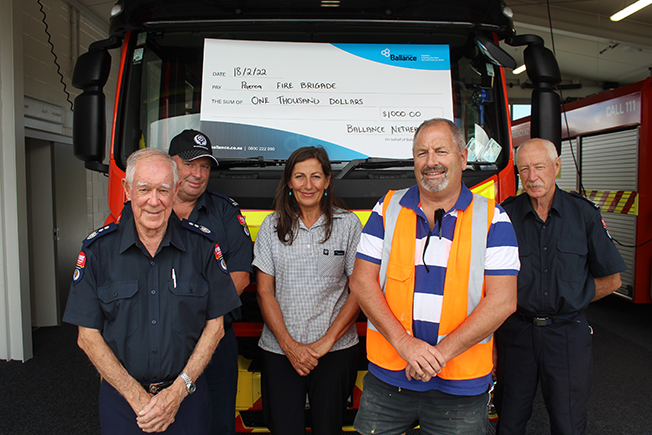 Paeroa Volunteer Fire Station’s been ignited with a $1000 donation from Netherton’s Ballance Agri-Nutrients.
Paeroa District Chief Fire Officer Bill Rackham, who’s been involved with the fire service for nearly 55 years, told The Profile he was “well and truly” appreciative of the generous donation.
“We haven’t had a donation of that amount of money for a number of years, and they’re really hard to come by these days so it’s really good,” he said.
Ballance Netherton service centre manager Mike O’Brien said they were pleased to give Paeroa Volunteer Fire Brigade the donation.
“Our area’s broken up into 11 Balance stores and each month if we pass our KPIs [key performance indicators] and have no injuries on site, a business is nominated to give a charity in their area $1000,” he said.
“I’ve always had a soft heart for the fire brigade because I was in the fire brigade many years ago.
“They do a very good job…when people are asleep they’re the ones fighting fires and taking people out of cars, it’s a very good organisation to belong to if you want to volunteer.”
Mr Rackham said the brigade needed to decide what the donation would go towards as it came “out of the blue” but was considering new uniforms and equipment.
“They [Fire and Emergency New Zealand] provide fire fighting equipment and clothing but there are some items of clothing they don’t provide volunteers,” he said.
“We were talking about possibly updating our wildfire jackets.
“It’s about maintaining the quality of our gear, obviously efficiency and health and safety comes into it as well.”
Deputy Chief Lindsay Hill said the donation could also go towards fanning the flames of the fire brigade’s van maintenance costs.
“Our van’s for the guys to go away on training courses and to carry additional people and equipment,” he said.
“It also isn’t provided by the fire service, so it has to be covered by our own resources.”
The station has responded to 23 call outs so far this year and last year responded to 186, a reduction from more than 200 in 2020.
It currently has 18 to 19 staff but hope to spark up more numbers because they used to have 24.
“During the day a lot of us may be out of town so we’re looking at increasing numbers of volunteers who’re more available in town,” Mr Hill said.

Mahjong tournament first of its kind