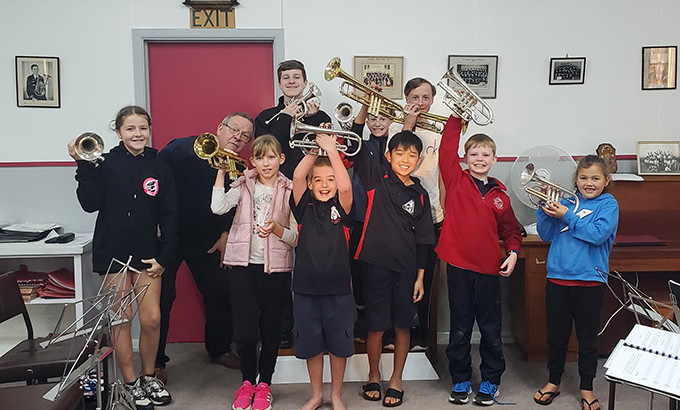 More students will be blasting tunes during this year’s brass instrument lessons hosted by Kerepehi Brass Band.
Band president Luke Van Vliet said this was the second year the band was hosting the lessons and five or six more people were expected to take part.
“At the start of last year we had about five people, then that number grew to about 10, and just through the publicity we’ve done up until the start of this year, we’re going to be starting with around 15,” he said.
“The lessons are open to anyone but we’ve had students from Ngatea, Kerepēhi, Netherton and Paeroa and we’ve got a few coming over this year from Te Kauwhata so we’re definitely expanding.”
Luke said the idea for the lessons came about last year when the band discovered the number of young members were dwindling and local primary schools weren’t really offering instrument lessons.
“We thought this was something the band could pick up the slack in to help offer kids the opportunity to get lessons and to also help secure a future for the band,” he said.
“If the lessons keep growing, we may look at options to form a junior community band then look for a conductor and bandmaster to lead them.”
Luke said one of the benefits of the band’s lessons was affordability. “Most lessons are about $30 for a private lesson with a tutor and often you get good lessons for that price but for some people it’s just not affordable,” he said.
“So we worked hard with our teacher, Clive Burnell, who comes over from Hamilton and we’re now offering lessons for $5 for a half an hour group lesson, then there’s instrument costs on top of that.”
Luke said people could also gain good team building skills through having lessons and playing an instrument was a skill they could keep for life.
“Most people do sports but let’s be real, by the time you reach 40, there’s probably not much sporting left in you, but something like playing an instrument, it’s a skill you keep for life,” he said.
“We’ve got members in the band who started when they were 12 and they’re now in their 80s.”
Luke said the number of members had also grown, and over the next couple of years, the band planned to seek funding to potentially expand their band hall, which was becoming too small.
“We’ve kicked off this year with a raft of new members and we’re now sitting at over 30 members which is great to see,” he said.
“There’s lots of enthusiasm within the band for the big year we have ahead and everyone’s over the moon with the generosity we received over Christmas and we’re very thankful for the donations we were given.
“That’s our main fundraiser for the band for the year and it was just so great to see everybody out supporting after what had been a tough year.”
Luke said more than $5000 was raised. Covid-19 red traffic light restrictions had made it difficult for the band to practice normally, he said.
“We’ve had to implement the vaccine pass because it just wasn’t possible for us to practice in our hall with the numbers we had.
“But we’re always looking for ways we can practice safely and make music together like outdoor marching practice.”
DETAILS: Kerepehi Brass Band lessons are held every Tuesday at 4pm at the band’s Matai St hall in Kerepēhi. For more info: email: kerepehibrass@gmail.com or Ph 021 039 6183.