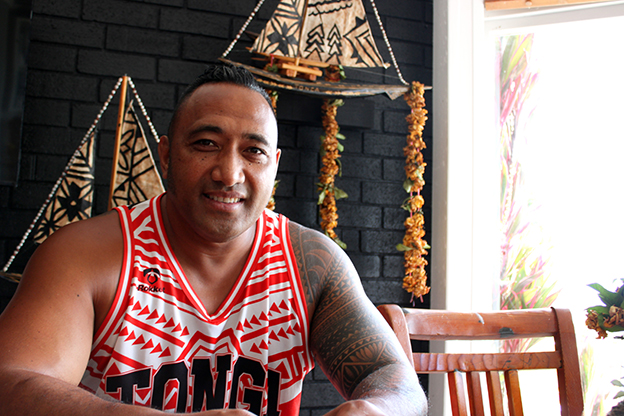 Alby Tukia has three older siblings, a niece, and cousins living in Tonga, who are “all safe”. Photo: KELLEY TANTAU

The Tongan community of Paeroa and Thames has already been enveloped with “so much love” following the Hunga Tonga–Hunga Ha’apai volcanic eruption.
But the attention now has to turn to ensuring the island nation is well equipped for at least the next six months, as a community leader reports of plantations being “wiped out” by the destruction.
In January, the explosive eruption of Hunga Tonga–Hunga Ha’apai set off an atmospheric shockwave and generated metres-high tsunamis.
The Tongan government has so far confirmed three deaths, and says all structures on the island of Mango were destroyed.
Alby Tukia, the president of the Tongan Community of Thames and Paeroa, has three older siblings, a niece, and cousins living in Tonga.
“They are safe, our land is inland, so we say: we are not the tsunami, we are the ash.”
Alby, who owns Grafton Cottages in Thames with wife Rachel, said when he heard of the eruption and tsunami on Saturday, January 15, he “didn’t really take any notice of it”.
The volcano had earlier erupted on December 20, 2021, and volcanic activity had continued throughout that week.
“I rang my mum [in Auckland] and asked if she had any news, but she said the [phone lines] were cut off. It wasn’t until Sunday morning when I woke up, and my niece in Tonga had sent me a video, when I broke down,” Alby said.
“When I saw my niece videoing at 6.30 at night, and the video was black and raining with rock… hearing her voice scared the sh*t out of me.”
Everything was brown, he said, and plantations had been “wiped out”.
“So, any help that Kiwis can give us is valuable, but we’re also asking [for help] for six

months’ time and 12 months’ time, too. All of the harvest is out now for the next six months, and 80 per cent of Tongan people get their income from the land and the sea.”
Alby, who lived in Tonga until he was 13, had fond memories of the island’s “fertile land”.
“Put it this way, when I ate watermelon there, I’d spit it outside of the door and I would have a watermelon there in the next two or three weeks. In New Zealand, you spit it out and nothing happens.” He said the country was “resilient”, and its people would “pick ourselves up and move on with a big smile on our face”.
Alby is the youngest of nine children, and after completing his schooling in Auckland, he moved to Palmerston North to play rugby. It was there he met his future wife, Rachel. The couple moved overseas, where Alby picked up rugby contracts in both North America and London.
They ended up living in the United Kingdom for 10 years. But after arriving back in New Zealand and choosing Thames to settle down, he realised there was a small but strong Tongan community in the area.What started as just three families had since grown to 11, all residing around Thames and Paeroa, and all passionate about sharing their culture, Alby said.
“Since the time we got the Tongan Community running, it has turned into one amazing roller coaster.”The community participated in local Christmas parades for 2019 and 2020, showcasing the traditional dances tau’olunga and kailao. They also perform at cultural shows around the district.
“People ask us: ‘How do you make it look so big?’ – especially when you look at the Christmas parade. But we’re just loud and proud; we’re proud of who we are,” Alby said.
They’re now asking for residents to give back by donating what they can through Facebook.
They also put on a fundraising stall at Little Toke in Thames over the weekend, where they sold Tongan food and drink, and performed island songs.
“Everyone asks me: are you Kiwi, are you British, or are you Tongan? In my heart, I’m always going to be Tongan… but I am blessed to have New Zealand and England as my adopted countries, too,” Alby said. “And there’s so much love here from the community.”
DETAILS: To donate, visit the Tongan Tsunami Fundraising – Thames/Paeroa’ Facebook page.