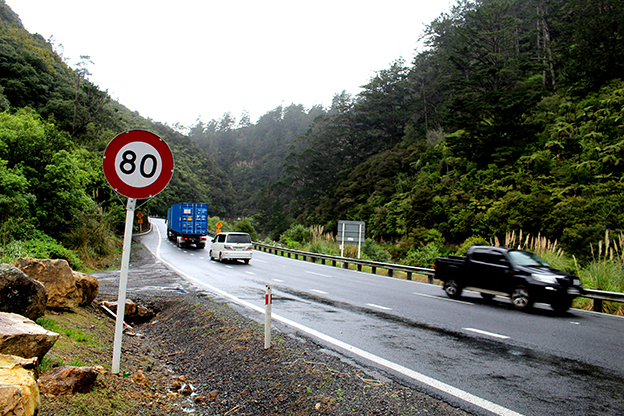 Two Hauraki councillors say they would “in no way” support another council’s call to lower speed limits. Photo: KELLEY TANTAU

Hauraki councillors have rejected another council’s call for support in its battle against lower speed limits.
Hastings District Council has lodged a petition with central government, asking for Waka Kotahi New Zealand Transport Agency to rescind its decision to permanently lower the speed limit on State Highway 5, between Rangitaiki and Esk Valley, from 100kmh to 80kmh.
It believes a blanket approach to speed reduction on the state highway will negatively impact the region’s economy, residents, and visitors.
But two Hauraki district councillors said they would “in no way” provide any support due to the road’s known dangers.
“On Waka Kotahi’s website, it says that between 2010 and 2019, 16 people were killed and 75 were seriously injured in crashes on SH5 between Taupo and Napier.
Since December, 2019, a further nine people have lost their lives in six fatal crashes. All but one of these occurred on that stretch of road – Rangitaiki to Esk Valley,” Waihī councillor Anne-Marie Spicer said at a meeting on February 9.
“So, on that alone, I’m sorry, but I’m against signing this petition and supporting them on it.”
Her fellow ward councillor, Duncan Smeaton, agreed.
“New Zealand’s road fatality rate per 100,000 people (4.4 per 100,000) is nothing to be proud of whatsoever. Having lived in a family where there was a fatality when I was a very young person… once someone is dead, they’re dead forever, and the effects and impacts of that go on forever,” he said.
“So, there’s no way that I can put away any support for this petition.”
The petition brings to mind Hauraki’s own deadly highway – State Highway 2 which flows through the Karangahake Gorge. A Valley Profile series last year reported that in the past five years, Waka Kotahi NZ Transport Agency figures showed there had been 68 crashes in the Karangahake Gorge, including one fatal, two serious, 18 minor and 47 non-injury crashes.
Around 15 years ago, community members successfully advocated to reduce the gorge’s speed limit from 100kmh to 80kmh, but now called for the area surrounding The Talisman Cafe to be permanently reduced to at least 60kmh.
This past summer, the speed was reduced temporarily to 50kmh around the entrance to the gorge’s popular walking tracks. Mayor Toby Adams agreed the highway would be better suited as a scenic route, with intervals of 50km/h speeds, earlier saying that “everybody in this world just works at a ridiculous pace”.
Now, with NZTA currently reviewing the speed limits along State Highway 2, Mayor Adams last week stood firm on his stance that speed contributed to deaths on the road.
“As much as mayors and councillors can say it’s not speed, it’s the road… it’s speed. The road doesn’t make a difference. If you’re travelling at 100kmh, you have more of a chance of dying than you have if you’re travelling at 80kmh,” he said.
“So, I actually support the dropping in speed.”
Elected members voted unanimously not to allow Mayor Adams to sign the petition on behalf of council. The petition closes on February 18 and as of February 9, had obtained 8000 signatures.