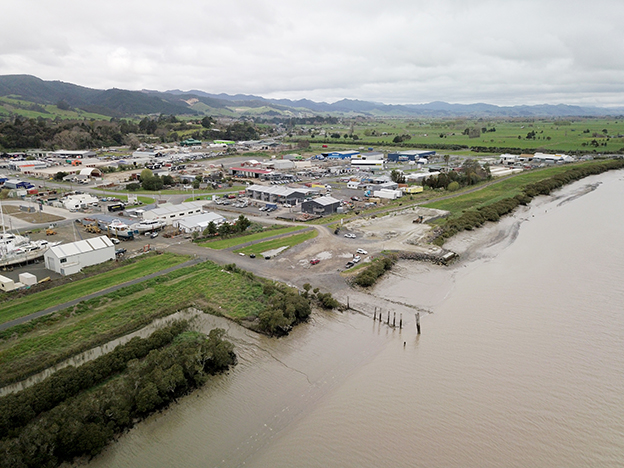 Roughly 125 metres of mangroves could be the difference in Thames getting a multi-million dollar marine precinct with a recreational wharf, or without one.
And as an independent expert consenting panel appointed by a government convener meets to determine whether the mangroves should go, the business association chair is calling on the district council to throw their support behind doing just that.
Thames-Coromandel District Council wants to develop a marine precinct at the existing Kōpū boat ramp, which they say will generate employment by providing up to 78 new direct full-time equivalent jobs during the design and construction stages of the project, and around 30 indirect jobs in marine servicing.
The government has fast-tracked the project, but only following a revised design – option 1 – which removes the recreational boat ramp attached to the initial plans.
This is to retain an area of mangroves that has been deemed a “natural wetland” by the government’s national policy statement for freshwater management.
However, business leaders are saying option 2 – the option with the recreational boat ramp – is the “only viable option”.
“It’s not just that there wouldn’t be a recreational boat ramp, but there also wouldn’t be any car parking,” a Kōpū businessman, who did not want to be named, told The Profile. “There would also be no ability in an emergency for other barges to be able to unload, which in option 2 they could.
“But the main thing is, if the marine industry expands the way it has been, and it’s attractive to the area like we want it to be, that whole thing will be too small, so it needs to be able to grow in the future, and with option 1, if there’s a big strip of mangroves in between the river

and whatever you’re doing, it’s never going to be good for anything.”
According to the expert panel, the construction of the recreational boat ramp would result “in the complete or partial drainage of a portion of a natural wetland, being the area of mangroves”.
In order to determine whether construction can go ahead or not, it has sought independent legal advice.
Thames Business Association chair Warren Sly recently met with the expert panel in Thames, and told them that option 2 was the “unanimous choice” of all affected parties.
He said it would: accommodate private boaties by providing undisturbed access to the river; allow mussel barges to unload, enabling Kōpū to become a distribution centre; allow for economic development opportunities to be fully realised; and bring much-needed commercial development to the area.
“It’s the bedrock for future marine development,” he said.
“If option 2 can be implemented, it will grow the industry… and open the gate to all these other possibilities.”
According to the Environmental Protection Authority (EPA), the expert consenting panel has appointed Derek Nolan QC to provide independent legal advice on the status of option 2 under the National Environmental Standards for Freshwater 2020. Once the panel has received this advice, it will meet to determine the next steps.
Mr Sly believed a decision could be made come March, and asked for Thames-Coromandel District Council to “openly push” for option 2.
He said if option 2 was not passed, he was “not going to let it lie”.
Thames-Coromandel District Council chief executive Rob Williams said council supported both options for the Kōpū marine precinct – which received around $8.2m from the government’s Provincial Growth Fund.
He said council’s original application was for a facility that included both commercial and recreational facilities, but it had to be withdrawn because of the “legal ambiguity” with the wetlands.
The new application has an option with a recreational boat ramp, and an option that is for a commercial facility only.
“We’ll have to see now which option the EPA is able to allow us to proceed with, and what the resulting consent conditions may be,” he said.
“This is a complex process and I am sure the commissioners will do their best to provide the outcomes that the Thames community desires.”