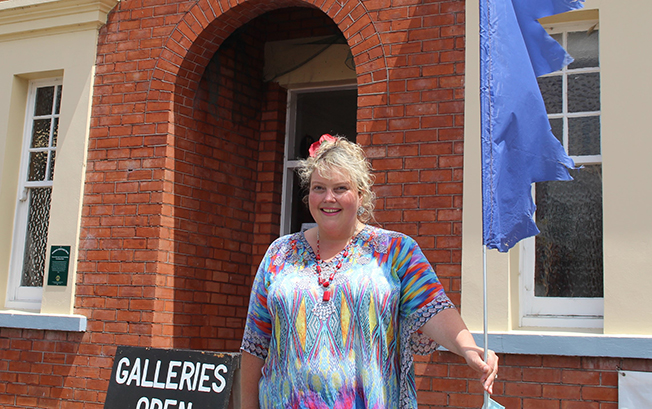 Paeroa Society of Arts director Jessica Lines encourages members of the public to visit during the Annual Art Awards at the society’s Normanby Rd gallery during February. Photo: GORDON PREECE

This year’s Annual Art Awards exhibition hosted by Paeroa Society of Arts this month aims to celebrate their members’ work.
The awards, which were previously called the members exhibition, will take place between February 4 and 28 at the society’s Normanby Rd art gallery.
There will be awards for painting, pottery and other media including mosaics, textiles and wearable arts.
There will also be a special category for spring-themed art because members have that artwork from when the awards were set to go ahead in September last year before being delayed by Covid-19 restrictions.
Paeroa Society of Arts director Jessica Lines said holding this year’s awards was quite difficult due to the Covid situation but the event had been made possible by the society’s hardworking committee.
“Normally we’d have a fancy opening ceremony and go all out celebrating our artists but this year we’ve decided it’s better to advertise and celebrate our artists [with an exhibition],” she said.
“We have between 80 to 100 entries but that’s probably not as many entries as there’s been in the past.”
For members to enter the awards, their artwork needed to be created within the past 12 months and not previously exhibited.
The awards will be judged by a local painter and potter on February 4 before informing the winners and posting photos of their artwork on Paeroa Society of Arts’ Facebook page.
Jessica also encourages the public to vote for their favorite artwork for the People’s Choice Award to be announced at the end of February.
The society’s also seeking donations to help with their building fund, which includes a $15,000 earthquake report and new facilities.
Jessica couldn’t say exactly how much they had raised so far but said they raised around $600 from a Christmas raffle last year and planned to hold another raffle later this year.
The society also uses part of new member’s subscriptions to go towards their building fund.
“We’ll be trying to apply for funding this year and if anyone could make a voluntary donation or purchase artwork that would be a big help towards our building fund,” she said.