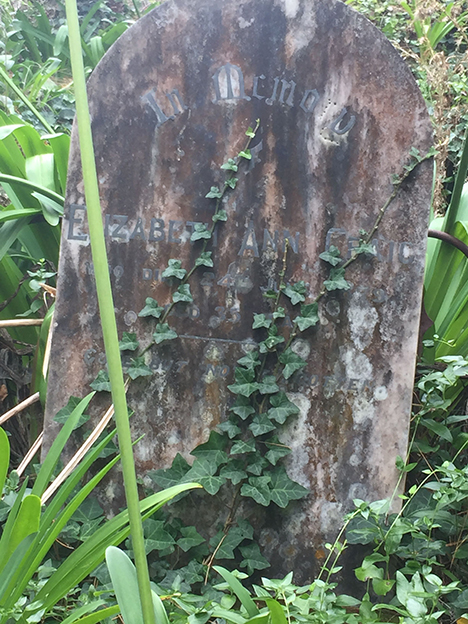 Ivy climbs over the headstone of Elizabeth Craig. Photo: SUPPLIED

“For God’s sake, Mrs Craig, what is the matter?” cried Theresa Molloy on seeing her Hape Creek neighbour.
It was a Monday morning in June, 1879, and Elizabeth Craig, who was pregnant, was in bed, shivering and very white in the face. Elizabeth’s eldest son was sent to get Eliza Jackson, midwife, who came at once. The midwife placed all the clothes she could find on Elizabeth, applied jars of hot water to her feet and gave her hot brandy and water. She was expecting Mrs Craig to be confined the next month and had been engaged for then. She went to Mr Bateman, the butcher, and asked him to go for a doctor.
Dr Robert Andrews arrived around 12.50pm. About 10 minutes before he arrived, haemorrhage had set in. He told the midwife to administer brandy. He asked Mrs Craig when she expected her confinement but she could not speak. Her husband Arthur told him she had arrived at full term. Dr Andrews then left and returned with tincture of ergot, which he administered at about a quarter of a teaspoon in half a tumbler of water. Half an hour later, he gave Elizabeth another dose and the haemorrhage stopped. He remained until 5.15pm and returning shortly after found her much better. He planned to remain all night in hopes of the confinement coming off.
He suggested the women change Elizabeth for the night. The midwife called for Theresa Molloy to warm the clothes and when things were ready the doctor gently drew Elizabeth on to his knee while they made the bed. The bed was nearly made when the midwife saw a sudden change in Elizabeth, and the doctor said: “Send for Dr Kilgour.” Dr Andrews lay Elizabeth down on the bed but within minutes she was dead.
At the inquest held at Grannaty’s Hotel, Hape Creek, Dr Andrews said when he attended Mrs Craig he did not consider the case dangerous as he succeeded in staunching the blood. Had he not had the bed cleaned, secondary fever would have set in, killing the woman in no time. He sent for Dr Kilgour but somehow he got the wrong message and did not come. Dr Andrews had a practice of 24 years in midwifery and had four similar cases since coming to Thames, all of which turned out safe.
The midwife said she had seen similar cases in India. She considered there was no danger in lifting the patient from the bed. Drs Kilgour and Payne gave evidence that labour should have been induced by artificial means. At the inquest the jury returned the verdict that if ordinary measures had been used Elizabeth would have survived.
The death of Elizabeth Craig caused great outrage with serious accusations being levelled against Dr Andrews. Infighting amongst Thames doctors was vindictive and continued for years with Dr Payne being the main agitator. Newspaper editorials and letters to editors were divided. One said: “Either Dr Andrews is morally guilty of the death of the woman, or he is the victim of a professional jealousy, which has taken a most dastardly course to exhibit itself”.
Elizabeth was buried at Shortland cemetery. She and Arthur had seven children aged one to 18 years. In an awful postscript, two years later Arthur, who had moved to Hamilton with the youngest of their children, became addicted to drink and deliberately burned himself to death. His brother took charge of the children. Dr Andrews left Thames six months after Elizabeth’s death.