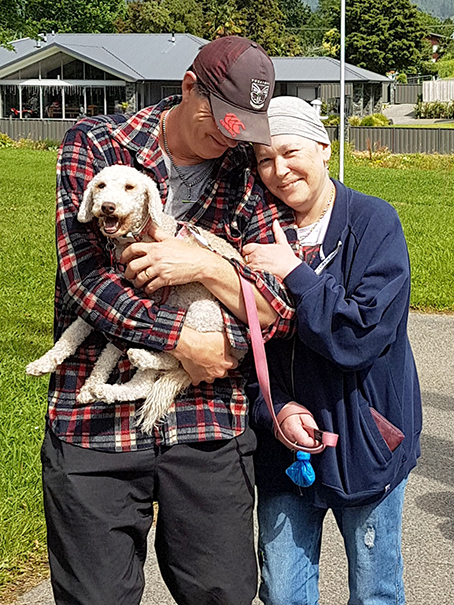 A Waihī couple may be forced to sell their home to cover the cost of an unfunded drug to treat lung cancer.
Craig Fergusson recently launched an online fundraising page with a goal to raise $208,000 to cover the full cost of an unfunded drug called IMFINZI to treat his wife Wendy Fergusson’s lung cancer.
Wendy said she really wanted people to be aware of her situation so they could promote Pharmac’s funding for the life-saving drug.
“I can only imagine being in my position how desperately people feel when they find out they could be saved but can’t afford to be,” she said.
“When the government is passing these things they need to think how would you feel if you had it [lung cancer] and this [IMFINZI] was your way to survive and you’re telling people they have to die because they can’t afford it.
“I’ve got new grandsons and I want to see them grow up.”
Wendy told The Profile she believed there was no big reason why Pharmac couldn’t fund it. “When you’re faced with this situation, you actually learn about this sort of thing, and it’s sad because now I know many people have died unnecessarily – my sister being one of them,” she said.
“I lost my sister five years ago to sternum cancer and this drug [IMFINZI] could’ve saved her, but it didn’t because it wasn’t funded and she couldn’t afford it.
“And she was the woman who raised me, not my mother.”
Craig, who has been with Wendy for 25 years, said “disappointed” would be a good word to describe how he felt about Pharmac not currently funding the drug.
“I respect their response to the pandemic but they throw a lot of money at that kind of thing,” he said.
“When you look at the two years the pandemic’s been around and how many people in New Zealand have died with it, yet there’s 1600-odd people a year dying from lung cancer unnecessarily,” he said.
Wendy’s had to undergo seven weeks of chemotherapy and radiation treatments, which she described as “horrendous”.
“I didn’t believe I would survive them to be honest.
“Because of the chemotherapy, which four out of the six days were eight-hour treatments, I couldn’t eat, drink, even drink water. They put me on drips and [it] got very nasty, and in the end I just about quit,” she said.
A former smoker, Wendy discovered she’d been diagnosed with lung cancer in July last year after her heart stopped.
“She went to her local doctor in Waihī about this pain in her shoulder she’d had for a while and was put on anti inflammatories, which she was reacting to and put a big strain on her respiratory system. [This] caused a blood clot to release from her lung and went through her heart and stopped her heart.
“That was right in front of me,” Craig said.
“I don’t know CPR but I did what I could, and the doctor later told me what I managed to do restarted her heart.
“We then went to Thames Hospital where they discovered a big mass in Wendy’s lung, which they pointed to as lung cancer.”
Craig said after Wendy’s chemotherapy and radiation treatment, and because the cancer tumour was inoperable, the oncologist suggested they look into immunotherapy.
“I was looking it up… and at that time [the drug] Keytruda was the number one thing they were using,” he said.
Keytruda is funded in New Zealand to treat melanoma and bowel cancer but not lung cancer, which means Craig and Wendy have to find money for the drug themselves.
Craig set up a Givealittle page to raise funds toward the $120,000 cost of Keytruda.
But before Wendy could start on Keytruda, her oncologist changed her immunotherapy drug to IMFINZI, which is specifically targeted to treat lung cancer. Also unfunded, the couple found they now had to raise $208,000 for 12 cycles of IMFINZI, with just over $10,000 raised so far.
Craig described the donations as “amazing”.
“The neighbours have been great and even if people don’t donate, just share the message and tell those people to share it, crowdfunding’s about having a crowd,” he said.
Pharmac is currently seeking feedback on a proposal that would result in IMFINZI being funded from August.
Craig said funding for IMFINZI would be “absolutely awesome”.
“It’ll give Wendy her last few cycles, because she should be finished by the end of the year,” he said.
DETAILS: Wendy Fergusson’s Givealittle page: givealittle.co.nz/cause/help-wendy-finish-her-journey