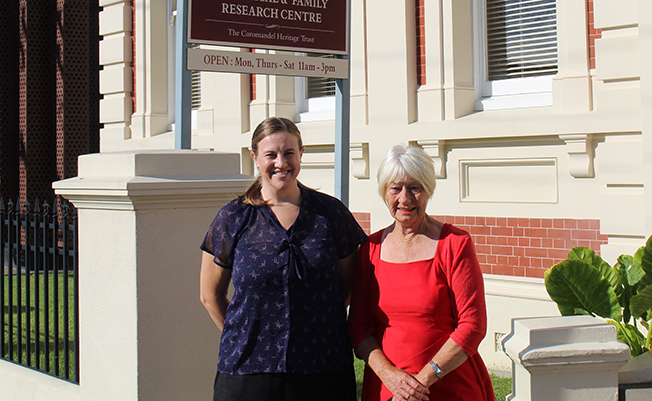 The Treasury has launched a new website to allow members of the public more access to the region’s historical artifacts.
The heritage research centre on Thames’ Queen St, collects, cares for and shares diverse historical records from the Thames-Coromandel and Hauraki districts.
The new website’s lead, Beth Mackay, said The Treasury’s new website, which was launched on January 24, was needed after its former website was taken down early last year when the database was hacked.
“We wanted to make the new website future-focused and informative with a nice design because a lot of historical institutions are perceived to be dusty and old fashioned,” she said.
The new website, which cost $9000 and took six months to create, was made possible by a combination of many funding applications and hundreds of volunteer hours. “We had a very generous anonymous donation towards the website and a [$6000] grant from Lotteries Environment and Heritage, and had wonderful web designers in Auckland who helped us with the design,” she said.
The Treasury then approached a photographer who sold the rights to use a photo he took of the building at dusk with its lights on for the new website’s home page.
“We’ve missed having our website because people from anywhere in New Zealand and places like Australia, USA, UK and Canada would contact The Treasury with research enquiries and our volunteers would be able to do the research for them.
“So we’re hoping the new website makes it so much easier for people to do this.”
Users of the new website will also be able to find out about The Treasury’s collections, purchase books from their online store and get involved in The Treasury.
Beth said one of The Treasury’s biggest collections included the A&G Price Collection.
“The reading I’ve done is that when gold was discovered here, it regenerated Auckland because there was heaps of work needed and was why A&G Price was set up here,” she said.
“During the peak of gold mining the population of Thames was around 20,000 and the population of Auckland was around 11,000,” she said.
“That’s why a lot of Kiwis have connections to the area.”
Beth said after A&G Price went into liquidation in 2017, all their records came to The Treasury, including photos and books with the workers’ names and their wages all written in ink.
Beth said The Treasury’s next phase was digitally cataloging what was in their archives for the website.
“We only know a small portion of what’s in there because when The Treasury first opened, people flocked in with their family collections and records and all the volunteers could do with this influx of material was clean them and catalog them by hand,” she said.
“So the website’s part of a bigger strategy of digitally cataloging everything and making it available online.”
DETAILS: The Treasury’s new website can be found at: www.thetreasury.org.nz.