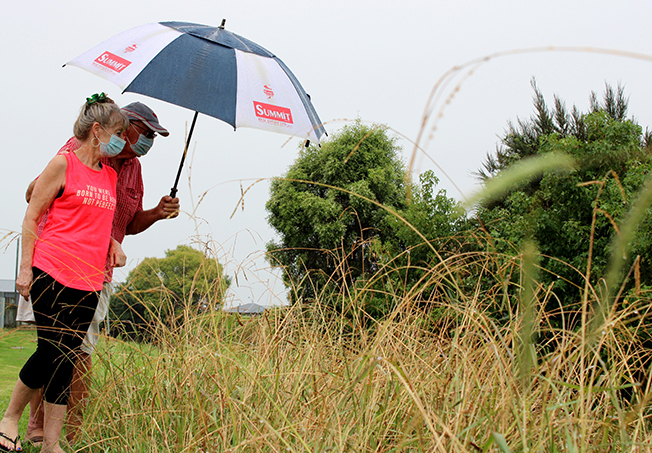 Neighbours Brigette Heymans and Michael Cathels have been trying to get Hauraki District Council to clean up a section of the Hape Stream for months, saying it’ll soon flood their homes if left untouched. Photo: KELLEY TANTAU

There’s koi carp, eels, and oil slicks floating down a section of the Hape Stream in Paeroa.
There’s long, unmaintained grass on either side of it, which nearby residents say is home to rats. There’s a chance of saving the stream, though, if Hauraki District Council invests in it, the locals say, and the council isn’t ruling that out. Michael Cathels and Brigette Heymans are neighbours on Towers St, which crosses through a “highly modified watercourse” that makes up the Hape Stream.
For 18 months they’ve been trying to get the council to see it as more than an “eyesore” of a stream, and turn it into an innovation – an area where residents can safely walk and take in the wildlife. They told The Profile they haven’t had much luck – yet.
“But it’s not a pet hate for us,” Brigette said. “This is more of a love for the stream. When you live close to it and you walk past it every day, you’ve got a connection with it, and I just see everything that’s happening to it.”
In more than 18 months of living along Towers St, Brigette and Michael said they have seen council staff maintaining the stream by lawn mowing either side of it; however, they have not seen the waterway being dredged to remove rubbish, weed-hacked to mitigate poor aesthetics, or cleaned to promote water quality and remove oil slicks.
There was a milky layer along the top of the stream when The Profile visited one Friday, as well as signs of piping and concrete underneath the dark water, but council said dredging the water was not “environmentally good practice”, and so said it was working on alternative methods to better manage the stream’s environment. But Brigette, whose mother lives with her, and Michael fear their homes will flood before anything gets done to the stream. “My mum gets upset every time it rains,” Brigette said. “Our places will flood if this doesn’t get done, and that’s the bottom line.”
The pair were happy to have a self-established working bee, but joked that while it would be easy to get down to the water, getting back out of it would be near impossible, as the overgrown grass obscured the bank by about a metre.
A close-by waterway opposite the Paeroa Old Boys Sports Club field had its own issues, with Michael once being witness to an elderly woman falling into the stream after her dog.
“Dream streams are what we really need to have, so it’s nice for everybody,” Brigette said. “Safety first, and then why not make it pretty?”
Hauraki District Council’s group manager engineering services Adrian de Laborde said the modified stream formed a critical role in Paeroa’s flood protection network. It was a “fairly complex” system, he said, but it was robust. He stated the areas adjacent to the stream were designated flood ponding zones, which did enter on to property boundaries, and work was being done to monitor the performance of this area, as well as the entire Paeroa network.
“This will enable us to better manage the network and address the effects of climate change. This work should be completed in the first part of this year.”
He said there was “absolutely” a strong desire to improve the current biodiversity of the stream – and other waterways and areas of the town. “This includes providing walkways for the community [and] is part of a long term strategy,” he said.
Council was also working on a planting and biodiversity programme for the Hape Stream based on recent planting trials undertaken by Waikato Regional Council, focused on improving the overall ecology of the waterway.