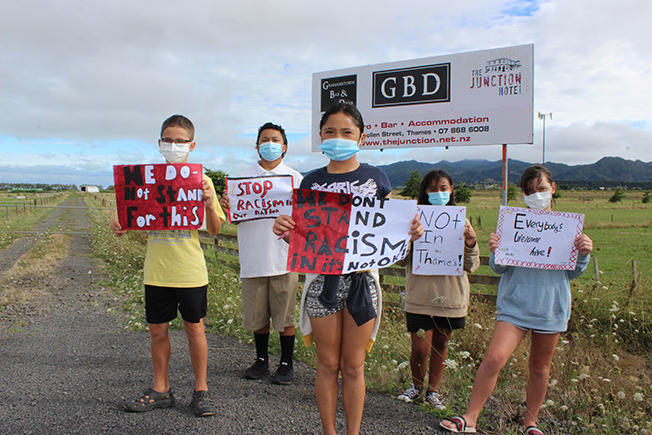 Thames South School pupils take a stand beneath the billboard they cleaned with some handmade signs of their own. Photo: TERESA RAMSEY

A group of primary school students have taken it upon themselves to remove racist graffiti from a sign at the entrance to Thames.
They also brandished their own signs which said: “Everybody’s Welcome Here!” and “We Do Not Stand For This” to counteract the vandal’s intent.
The graffiti, spray-painted on the billboard advertising Pollen St restaurant The Grahamstown Bar and Diner (GBD), said “stink a** curries”.
The choice of words was odd, owner Karl Edmonds said.
It seemed derogatory towards people from Indian descent, and neither he, nor his staff, had that background.
“It’s ridiculous because [the vandals] are not achieving anything,” he told The Profile.
“I don’t know if they’re aiming it at me, at my business, or my staff… using those words, who is it aimed at?”
Karl said the sign, near the Kōpū Bridge, had been targeted three times over the Christmas-New Year period, and the vandals had also tagged the bridge. The first two times, it was cleaned up by Higgins for free.
“It’s frustrating, because we’re all busy trying to run a business and you’ve got to deal with d*ckheads doing something like that, but good on the school for going and cleaning it.”
Thames South School year 7 and 8 students went out last week with the kura’s caretaker, Barry Priest, to take matters into their own hands and hopefully remove the graffiti for good.
Teacher and assistant principal Whaea Tineka Rhind said the students wanted to show everybody was welcome to Thames, and that the racism did not reflect the wider community.
“I commute from Auckland to work every day, and I’ve been seeing it since last month, so I took a photo of it, and discussed it as a topic of discussion with my students, and I got their opinions,” she said.
“As you can imagine, they weren’t very happy about it.”
With most of her students being Māori, Whaea Tineka said one took a particular dislike to the words, highlighting the fact that they could be seen before the pouwhenua (carved posts) on the Kōpū Bridge.
“It became a personal thing for them,” she said.
“They were very passionate about going up and trying to get rid of it.”
The kura (school) caretaker Barry Priest put together a concoction that would scrub the billboard clean, and though Whaea Tineka said they’d hoped to remove the graffiti before the Waitangi long weekend, it was good to finally have it gone. It was also good for “anybody else who has to pass that sign”, she said.
The GBD was now looking at installing electric wiring and cameras to deter the vandals even further.