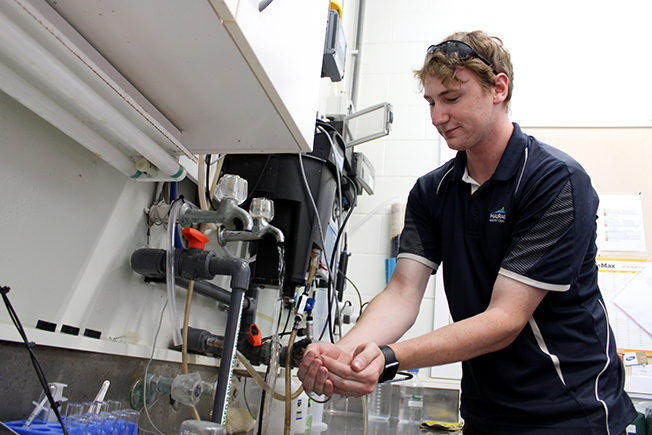 There’s no “perfect, clear” bore system coming down from the Himalayan mountains to supply Hauraki residents with drinking water.
Instead, there’s the Waitawheta River, in the Karangahake Gorge, and according to some, its water tastes “foul” and is “undrinkable”.
But it is drinkable.
At the Paeroa Water Treatment Plant on Bennett St, there’s an indoor tap that can shoot out water straight from the reservoir.
The men who work at the plant drink that water every day, and have done so since they started there in 2019.
Of course, the river water has to first go through “a whole process” to make it compliant.
“Not everyone notices the taste,” the district’s mayor Toby Adams says. “It does affect some people more than others, but just because it’s got a funny smell or a different taste, it’s still 100 per cent safe to drink.”
The men are aware of a recent social media post where residents criticised the taste of the water – as well as recent water restrictions – with one saying they’d rather drink from the farm bore than from the tap.
Another said it was “not even good enough for the dog”.
That “dirty” taste is due to the river getting lower in the summer, making it easier for algae to grow and produce “taste-forming compounds”.
“We have very limited options for where we can have our intakes for our water, and our water source, so we do the best we possibly can with the known sources close to us,” Mayor Adams says.
The council has a resource consent from the Waikato Regional Council to collect water from the Waitawheta River at a rate of 7000 cubic metres a day.
That’s seven million litres, or, more than 29.5 million cups.
However, a weekly snapshot of water usage at the Paeroa reservoir saw households use a maximum of 250,000 litres every hour.
Even at 2:30 in the morning, the reservoir loses 110,000 litres.
According to council, the reservoir levels are “critically low” – which is why a total watering ban was recently issued for the town. The restrictions eased slightly on February 3 to hand-held hoses on alternate days.
It’s likely one of the first times in 10 years Paeroa faced water restrictions, Mayor Adams says.
And the cause?
“Three years of very low rainfall, and dry, drought conditions in a row. It makes it hard to keep up and the river has never caught back up,” he says.
“But some people are so used to turning their tap on and having water come out at every instant that as soon as there’s a restriction of any type, they can’t comprehend the process that it takes to get it from a low-flowing river, through the plant, through the pipes, and out their tap.
“It’s a complicated process and it takes a lot of skill, and we’re blessed to have the calibre of staff that we do at our council who work when they’re asleep.”
It’s not just a glib comment, either. The plants are monitored seven days a week and if chlorine levels get too high or too low, an alarm is sent to the staff’s phones, sitting on their bedside tables.
Luke Parish, one of the treatment technicians, recently woke up at 3am to deal to a matter arising at one of the four

plants. He didn’t get home until midnight that day.
He started in the role straight out of high school, as a council cadet in 2019.
“I didn’t even know what water treatment was when I started… I live just down the road and I never knew there was a water treatment plant here,” he says.
And with a lack of understanding likely the cause for most people’s concern about the drinking water, he’s inviting anyone to come for a supervised tour of the plant.
Doing just that, the team explains how the water travels from the Waitawheta River to the treatment plant, and gets sucked into a membrane filter unit.
Each filter contains 1200 “straw-like” lumens, and the gap of each lumen is one ten millionth of a metre wide.
That’s like taking a millimetre on a ruler and cutting it into ten thousand pieces, treatment technician Tyrone Negus explains.
Anything bigger than that – dirt, mud, most algae – gets trapped in the lumens and doesn’t make it through the system.
The men say the water is then drinkable, but to get it to safety standards, chlorine is added to the water. Chlorine is a disinfectant that kills water-borne viruses and bacteria.
However, Hauraki District Council’s Paeroa plant also utilises a “UV taste and odour system”.
In small amounts, hydrogen peroxide is sent through the UV system and reacts to anything it comes into contact with, except water.
Tyrone says they don’t have to use the UV system to make the drinking water safe, it is just something council utilises to make the water nicer for the town.
However, during summer months, the river’s algae can create chemicals that taste bad and are tiny enough to get through the lumens.
“I get that there are frustrations about the taste of the water, but in comparison to how much you’re using throughout your house, it’s really not that bad,” Mayor Adams says.
“It’s all about where we get our water from. We don’t have a perfect, clear, bore system that’s coming from the Himalayan mountains feeding our water intakes.
“Our water has got to go through a whole process, and it’s a costly, expensive process, and the team works hard to get rid of any contaminants, taste, and odour before it gets supplied.”
There are three other water catchments the council receives its water from: Waihōu River (15,000 cubic metres a day); Waitakaruru River (6000 cubic metres a day); and Walmsley Stream (3500 cubic metres a day). Around 587km of pipelines deliver water to 7500 properties.