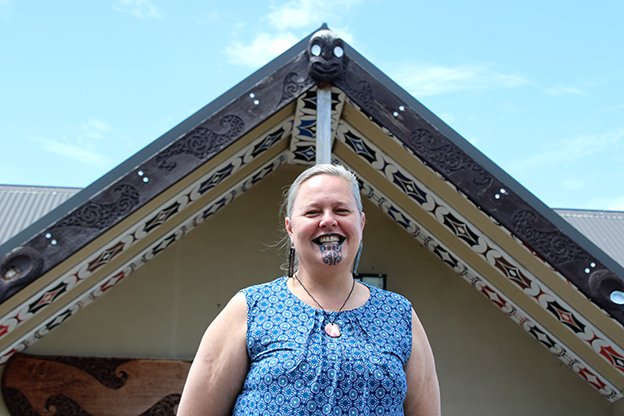 Riana Manuel will commence her tenure at the new Māori Health Authority on February 14, leaving her role as chief executive of Te Korowai after six years. Photo: KELLEY TANTAU

One of Thames Valley’s own has been appointed the first chief executive of the new national Māori Health Authority.
And though the new role will see her create a foothold in South Auckland, Riana Manuel’s ties to the area will never be severed.
Riana, of Ngāti Pukenga, Ngāti Maru and Ngāti Kahungunu, has spent the past six years as the chief executive of Te Korowai Hauora o Hauraki, which operates six whānau health clinics throughout the rohe (area).
For the past two years, she’s been on the front-line of the Covid-19 pandemic, with Te Korowai providing mobile vaccination and testing clinics around the district.
It helped associate Te Korowai with “credibility” and “availability”, she said.
“To be honest, I believe it’s part of being Māori. When someone passes away, we have a system that gets up really quickly, and we learned as very young children that when that happens, you drop everything, you get back to the marae, and you start prepping to support that family,” she told The Profile.
“So, we know how to get in there and do something about a situation pretty quickly, and it doesn’t matter that we’ve got jobs and children and all these other things.
“We put stuff down and pick stuff up and make sure people are taken care of.”
Te Korowai was quick to act when Covid-19 cases were found in Kaiaua in September last year.
Riana was among those on the ground implementing a pop-up testing centre at Wharekawa Marae in Whakatīwai.
“That’s what I think drives our [Covid] response; that we’re not good at waiting around,” she said.
“With Covid, once it arrives, you’ve got zero time to respond, so you have to be responsive.”
The Māori Health Authority is part of the government’s new health system reforms, and will work in partnership with both the Ministry of Health and Health New Zealand.
Riana will begin her tenure there on February 14, but said she was leaving Te Korowai with a “safe pair of hands” belonging to new chief executive Taima Campbell.
“I’m deeply grateful. We’ve never been about lots of fluff, we’ve always been about getting the job done,” Riana said.
“Data always drives what we do, and confidence comes over time. If we talk about the enrolled people who use our services, it’s about 50-50; 50 per cent are Māori and 50 per cent are non-Māori, so I have to believe, based on that data, that we are a service everyone has confidence in.”
One of the services Te Korowai is moving forward with is a ‘Screening Centre of Excellence’, which will aim to increase the rates of cervical, prostate, bowel, cardiovascular, and diabetes screening, in order to “address equality at its core”.
She also believes longevity is the crux of a strong organisation.
“At the end of the day, I have 300 staff members who rely on their mortgage and their rent to be paid, and they rely on us to be an organisation with longevity… so it’s not just about the 30 years that have been, but the 30 years out.”
Riana’s new role will see her ensuring the health system works well for Māori through leading change, developing strategy and policy, commissioning kaupapa Māori services, and monitoring the overall

performance of the system to reduce health inequities for Māori.
“If there is one thing I am sure of, it is that I have enough experiences of what poor health looks like to know where we don’t want to go, and this is an opportunity to be the change we want to see,” she said.
“I apologise in advance if we don’t get it right straight away, but the one thing I do know about myself is that I will push on until we get it right.”
Riana and her siblings grew up in Manaia, in the Coromandel.
Her parents, Harry and Ruth, raised them with a strong connection to their whakapapa (genealogy), something Riana regularly reminds herself of.
“Mum was a registered nurse… she was the nurse on the ambulance, and dad was the driver,” she said.
“Dad is of Māori descent, mum is Pākehā; they are the ultimate expression of partnership, and they raised us children exactly like that.
“So, everything I do is to try and ensure that the footprints I leave behind are footprints our babies can follow and can be a guide for where to go,” she said.
“Everything that drives my decision-making here on in is being a good tupuna (ancestor)”.