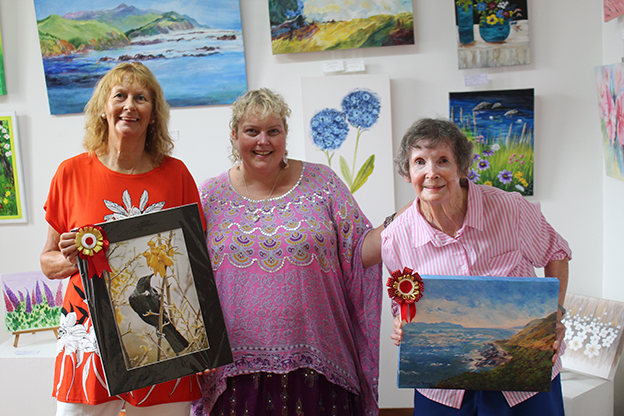 Two winners of this year’s Annual Art Awards exhibition hosted by Paeroa Society of Arts “couldn’t believe” they’d won for their artworks.
Kathy Bland of Paeroa won first prize in the spring section with Spring Tui and Shirley Thomas of Te Aroha won first prize in the painting section with West Coast Beauty.
The pottery section was won by Denise Judd with Black Sculpture, and the other media section was won by Elise Belovic with Metal Eden.
Kathy told The Profile her inspiration for Spring Tui came from a photo she took of a Tui in her kōwhai tree.
“I planted a kōwhai tree in my garden a few years ago and last year a tūī came in. I stood behind my curtains and poked my long lens out the window and it got a bit used to me so I could take a few photos,” she said.
“I work out the composition and the lighting first then because I take photos in raw format, I tweak them a little bit to give them contrast and make them stand out.”
Kathy said she got into photography during her 20s when she belonged to the Henderson Camera Club and used to go to Speedway and wanted to learn how to take better photos.
“After I bought my first digital camera in 2004, I went to a class run by a guy who used to be president of the Manukau Camera Club, which I later joined and joined the Howick Camera Club as well, and from there it was about learning and more practice,” she said.
Kathy also participated in the awards last year with two of her photos, picking up second place and commended prizes.
Shirley said her inspiration for West Coast Beauty depicting the Fox Glacier area came from an AA Travel Book.
“Something about the West Coast is special. I’ve been through the West Coast and I think the scenery’s beautiful,” she said.
“Every minute of the day the scenery changes, it’s better to paint a morning or evening one with mist and [art’s] been my whole world and enjoyment.”
Shirley said she’d done art for 43 years.
“I’d come off a farm in Te Aroha and was very homesick from the farm and the sheep, and after a year I plucked up courage and went to a German artist who was traveling around the Waikato giving art lessons,” she said.
“He taught me how to paint skies, trees and reflections and I kept getting lessons from him for six years.
“My paintings grow as I start them, from my heart through my head and out through my hands.”
Shirley had previously won a first place prize for one of her paintings eight years ago when the awards were called the members exhibition, has has won the Thames Summer Festival Art Award twice and received many national awards.
Paeroa Society of Arts director Jessica Lines said she was “overjoyed” by this year’s awards.
“We put in so much hard work and in these Covid-19 times I was nervous because I didn’t know if we would have enough entries,” she said.
This year’s awards consisted of 103 entries plus the guests’ artwork.
“All the art gives me joy, just to see all the variety of different styles and levels, I just love it,” Jessica said.
“The public have had some really good reactions to all of the artwork and pretty much every day since opening we’ve had a sale, so that’s awesome for us. May it continue for the rest of this month.”
Jessica said the public also really like that they can participate in voting in the people’s choice award which is set to be announced on February 25.
The awards will continue until February 28.