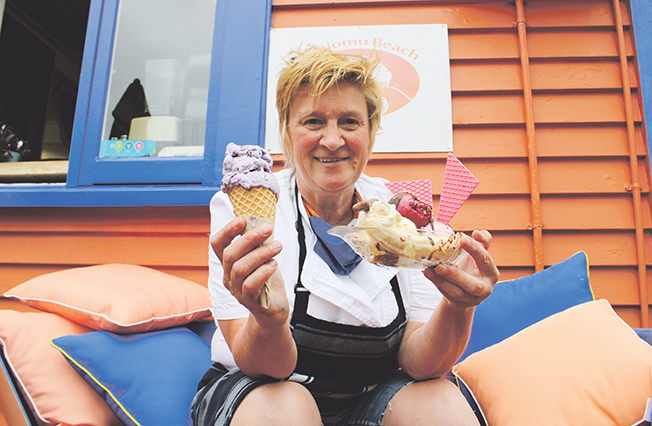 Ice cream is to kids what coffee is to adults.
That’s what Julie McMillan has seen throughout her 13 years running the Waiomu Beach Cafe along the Thames Coast – although even adults are tempted by the treats in the chiller.
“Ice cream is an adventure. It’s about the excitement of coming in, seeing the selection, and deciding what you’re going to have that day,” she told The Profile.
“Some people will stay true to their favourites, and some will give something else a go.”
The cafe is a popular pit-stop among locals and Thames Coast travellers.
It not only provides fan favourites or experimental flavours, but also sorbets for the lactose intolerant, and Dr Feelgood Frozen Pops for people with allergies who “still want to enjoy an ice cream treat”.
The ice creams in the chiller come from the award-winning New Zealand brand Deep South.
“They have a very nice texture and a really nice mouthfeel, and most importantly, they have liquorice ice cream,” Julie said.
“It’s my favourite, and we get a lot of people who come in just for it.”
The brand also offers flavours such as slime lime, fairy bread, rum and raisin, salted caramel fudge – even pinky winky.
“It’s raspberry ice cream, chocolate chips, and caramel swirl,” Julie said. “They have nice, creamy ice creams with really good, rich, decadent flavours.”
This year will be her second summer with Deep South, and the range helps Julie and her staff broaden the palates of their customers.
“I’m an experimental taster, so I love trying something new. There are people who stick with what they know… but as much as they go in with an idea of what they’re going to buy, they might be leaving with fairy bread.”
Another aspect which made the cafe one of the best in ice cream scooping was its communication with customers.
“For me, it’s about my team taking time with the kids, asking them which flavour they want to eat first,” Julie said. “One of them suggested putting a marshmallow on the bottom of a cone… but then the tricky thing is [the child] having to decide whether they want a pink one or a white one!”
Julie also said she went back to “the old fashioned way of doing ice creams” – with sprinkles or chocolate dip, or in a waffle cone or regular cone, or as a banana split.
“Ice cream is an adventure, and it’s not cheap anymore,” she said.
“It used to be one of those cheap, frivolous things and it’s not anymore.
“The prices have gone up, so it’s about making ice cream an experience, and that brings it back to it being just as exciting to adults as it is to kids.”