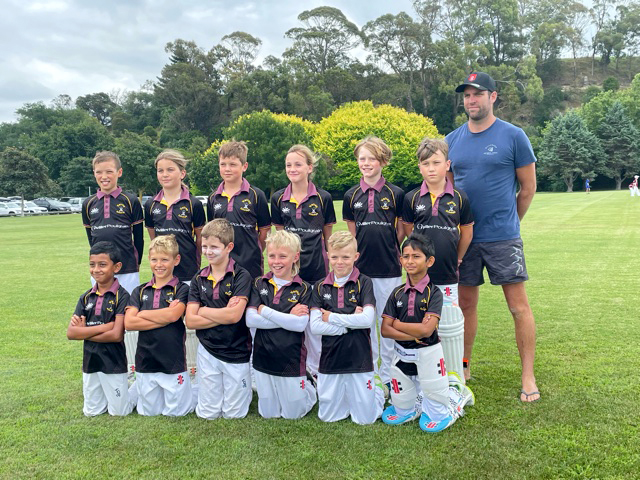 Valley Cricket’s year 4-5 team have come off the bat winning all their matches at the annual Hawke’s Bay Cricket Camps.
The tournament for the year 4-5 category was held from January 6 to 8 with Valley Cricket defeating Auckland’s Cornwall, Wellington’s North City and Hawke’s Bay’s Havelock North and Taradale on home turf.
Coach Scott Mackenzie said he was “pretty proud” of the team being able to play against very established clubs and come away with the four wins.
“Although for their age group we’re not meant to be focusing on wins and results, it’s still part of their cricket journey and definitely worth celebrating,” he said.
“We were the only team with two females so that’s also worth celebrating.”
Scott said he was most impressed by the way the team of 12, who’d only had a couple of trainings and one preseason match, came together and it was almost like they’d played together for years.
“They got on so well, they had each other’s backs and played very well which was key to the results,” he said.
“The four matches were won by an all round team performance with our great bowling line up who restricted the opposition’s runs, the beautiful fielding, and they backed it up with the bat everytime.”
Scott said one of the biggest challenges for the eight- and nine-year-olds was playing two 30 over matches in one day, starting at 9am with the end of innings at 6pm.
“But we had a fantastic group of close to 40 supporters who rallied behind the team which contributed to the way they played, which was pretty awesome,” he said.
Valley Cricket’s matches were played across three Hawkes Bay venues including Park Island Recreation Ground in Napier, Memorial Park in Haumoana and Clifton County Cricket Club near Cape Kidnappers, which is considered one of New Zealand’s more beautiful cricket grounds.
Scott said Valley Cricket’s year 7-8 team began their Hawkes Bay campaign on January 12. The North Island event continues until the end of January and attracts hundreds of primary and secondary school children.
A positive Covid-19 case was detected at the Cricket Camps but was considered low risk due to strict Covid-19 measures. Scott said the tournament required everyone to be fully vaccinated and the team would’ve been contacted by Hawke’s Bay Cricket Association if they had been near the positive case.