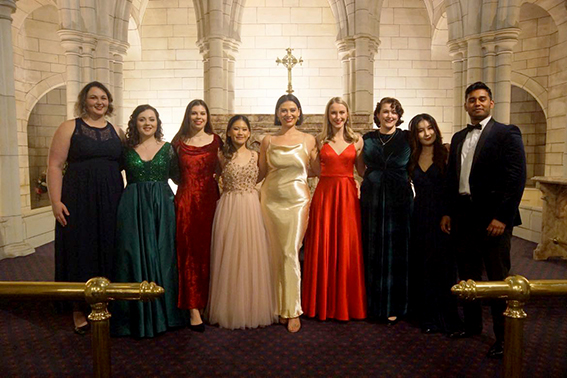 Originally a pianist accompanying other singers during their performances, Hannah Ashford-Beck is now the one at centre stage, stretching her vocal chords as part of the prestigious New Zealand Opera development programme.
The former Paeroa performer was one of three artists selected late last year for the Dame Malvina Major Foundation Studio Artists development programme.
Co-ordinated and administered by New Zealand Opera, it provides an opportunity for some of the country’s most promising young opera singers to develop their craft.
Hannah, 23, told The Profile she had “absolutely no expectation” of making the cut, after auditioning for the programme for the first time in 2021.
“I had done well in a competition earlier that year, but I still thought there were so many more experienced people. I was hoping just to get to the final round so that the [judges] could see me, and know who I was. So, it was so unexpected and such an exciting thing,” she said.
The former Hauraki Plains College student was originally a pianist, but had been singing for as long as she could remember.
“My mum’s a piano teacher, so music has always been going on in the house. My earliest memories would probably be singing in church, and putting on nativity plays and singing in those… I think I loved singing from quite an early age,” she said.
However, discovering opera came when Hannah was 16, after taking singing lessons with a family friend.
“I didn’t think I was a very good singer because at the time, I went to a school where everyone sang pop-rock.
“I don’t sound like Adele,” she said. “I don’t have that kind of voice, so it wasn’t until I started doing lessons with my mum’s friend when it felt like, okay, this feels like the music I’m meant to be singing.”
But for years, Hannah, a soprano, kept her newfound talent a secret.
“Most of my friends didn’t know I sang opera,” she explained.
“Hauraki Plains College had a thing called the Pinnock Cup, and on my second-to-last day of high school, I sang an aria from Carmen called Habanera. That was the first time most people had heard me.
“I got a really great response,” she said. “I had people messaging me saying they’d never heard that kind of music. Everyone was so surprised [because] it wasn’t a thing we had in my area.”
After school, Hannah completed a Bachelor of Music from the University of Auckland, majoring in classical voice, following a gap year to Italy, where she attended Liceo Musicale Alessandro Manzoni, a music college.
She has sung with the New Zealand Youth Choir, Voices New Zealand, Auckland Chamber Choir, and Auckland Youth Choir. Last year, she received the Mayor of Napier Vocal Award for Most Promising Singer and first place at the North Shore Becroft Aria competition.
She said singing opera had taught her to allow people to see her “at such a vulnerable moment”.
“When you’re singing, you are so vulnerable; at any moment you could crack a note or forget your words, and some pieces are really emotional and you’re putting those emotions out for people to see,” she said.
“Doing it brings a sort of confidence, and you soon realise it’s not about you, it’s about the music and what you can bring to people.”
The final concert for the development programme will take place in July, while Hannah will also perform in NZ Opera’s Macbeth in Auckland throughout September-October. Also selected for the programme was Katherine Winitana and Emmanuel Fonoti-Fuimaono.