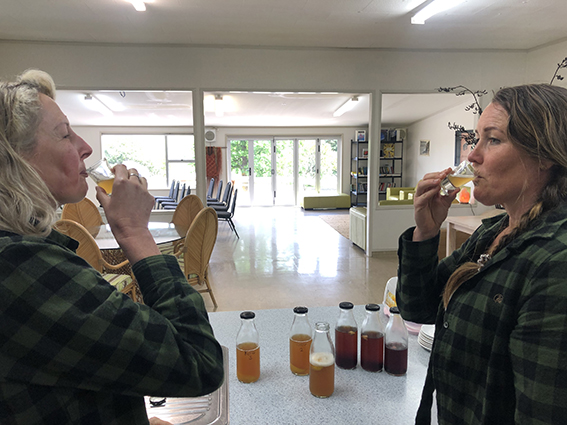 It’s a drink made of seaweed, but it’s sweeter than expected.
Though that’s not to say some trials saw a few “funky” and “fishy” concoctions get brewed inside the AgriSea lab.
The Paeroa agriculture business, which has excelled in creating organic seaweed biostimulants and nutritional supplements for the farming industry for more than 20 years, has turned its attention to human tummies.
It’s in the midst of creating a seaweed drink filled with beneficial antioxidants and minerals, and which could soon rival the rise of kombucha.
Back in 2004, the company, headed by Clare and Tane Bradley, created a liquid nutrition product for animals such as dairy cows, horses, chickens, dogs, and cats. Science undertaken at Lincoln University showed the product increased antioxidants and decreased oxidative stress in the animals. “So actually, the inclusion of seaweed into the diet decreased their stress. Think about that for a human,” Tane said.
“If this can play a part in our mental health, and our physical gut health, how amazing is that?”
Word started to spread that ingesting the animal nutrition could also reap benefits for humans, and soon, Tane and Clare – who have also drunk the healthy concoction – were inundated with calls from people inquiring about it.
“People started coming in and asking if they could drink the animal health tonic, and we couldn’t sell it to them for human consumption,” Clare said.
So, they started making freeze-dried kelp capsules, which could be eaten by humans, but the wheels never stopped turning on a tonic that could be drunk by people.
Now, after 17 years and a $48,000 cash injection from the High-Value Nutrition

National Science Challenge, Clare and Tane have fulfilled their dream.
They’ve been fermenting different species of seaweed using different methods, in order to create a seaweed drink that packs a punch.
“We’ve always wanted to be able to make this product for humans, because we know it’s got really good antioxidants, really good vitamins and minerals… it’s just a power punch of a nutrition package,” Clare said.
“There’s definitely stuff that’s in the seaweed we don’t find on land plants, so I think that’s why it reacts so well within your body,” Tane added.
The drink doesn’t taste salty, as expected, but sweet, with the pair saying there was “no point making a disgusting drink that no one’s going to have”.
“[The flavour] hugely depends on the seaweed species you’re using. We found some were quite fishy in flavor, and that probably was not going to be a target for wide human consumption, for a western palate especially, but the brown [species] are quite sweet,” Clare said.
“As we learn more through the project, we’ll become clearer in what our end strategy is, whether it’s a drink on a shelf, or whether its an ingredient to fortify things like aged care food, there’s lots of potential avenues for it.”
Traditionally, the pair have used ecklonia radiata seaweed, which has good iodine levels, they said, but recently they’ve looked at using red seaweeds, green seaweeds, and brown seaweeds.
“We’ve fermented different seaweed species in different ways, and some of them have been a bit funky, but we’ve been narrowing down our targets we’re going to go with. Then, what we’ve done with those targets is go through food safety testing.”
The targets have all passed the food safety tests so far.
Next, it will go through functional properties testing at Auckland University, as well as tasting panels.
All of the magic has been made inside AgriSea’s certified food grade facility at their Paeroa business park – without which, the concoction would not be possible.
“We’ve been wanting to do this forever, but part of the struggle has been around getting a food grade facility,” Clare said. “In our old building, it would’ve cost a lot to kit it out. So, buying this building three years ago meant we could make it a reality.
“We’ve been working on soil health, we’ve been working on animal health, we’ve been working on green cosmetics, and now we get to do what we’ve always wanted to do,” Tane added.
Tina Harrison, AgriSea’s research and development technician, has been working on the human nutrition trial for six months. She said they’ve made some “really nice” concoctions, as well as some “not so nice” ones.
“I hadn’t worked with seaweed before I came to AgriSea but when you look into it, it makes a lot of sense. AgriSea already sees the benefits of the product for animal health, so seeing that translate through for people is really exciting.”