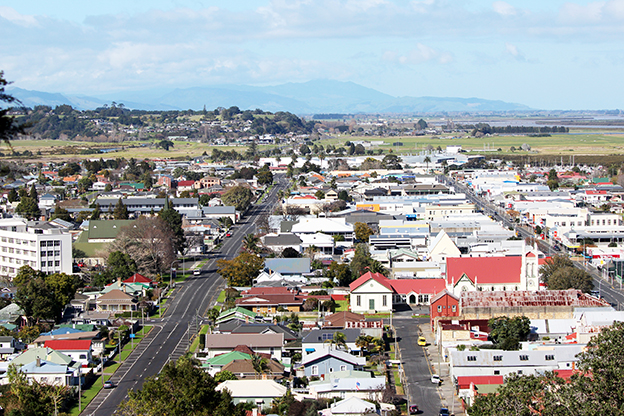 The Thames Business Association is fearing for the progress of its town amid a lack of housing and commercial development, which it says will ultimately drive businesses away from the district.
The association this month called on its members to provide letters of support to be collated in a dossier and presented to local council and central government.
It’s aim is to address Thames’ housing shortfall and lack of development of commercial property, particularly in the Kōpū area, with “extreme urgency”.
“It’s really horrific,” association chief executive Sue Lewis-O’Halloran said.
“Thames is being really negatively impacted by this housing crisis, and when you can’t attract good people to do the jobs you have available because there’s no housing, it makes it really impossible to progress your town.”
Sue said the association had heard anecdotally of many roadblocks being encountered by businesses, even driving

some of them out of the district to invest in other areas.
One such business had gone on to invest “millions of dollars” in another town, she said.
“Sometimes things are made so difficult for people in commercial development that they will go to another district, and I think when we make things difficult for commercial investors, they will just take their business elsewhere.
“We also don’t have the infrastructure in place for housing developments,” she added.
“We’re asking developers to come in and build houses, but we haven’t put in any infrastructure that should be in place before we, in my view, even approach them.”
Fewer than 40 new houses a year have been built in Thames over the past decade, and a lack of forward planning and investment means the houses that are available are older and of low quality.
Mayor Sandra Goudie earlier told The Profile it was “imperative” new homes were built.
The new Thames and Surrounds spatial plan was designed to inform changes to the district plan, and according to council, would signal to land owners, developers, and investors the council’s growth intentions for the area.
“I think it’s going to take a very concerted effort and a lot of collectively strong voices to change the culture and force the decision makers at both local and central government to help our town survive and move forward,” Sue said.
“I really worry about the businesses in the whole Thames ward, because we’re not proactive in our approach. But I am hopeful, and there are people in positions of power who are on the side of business and commercial development.”

Principal ballerina at home in Turua