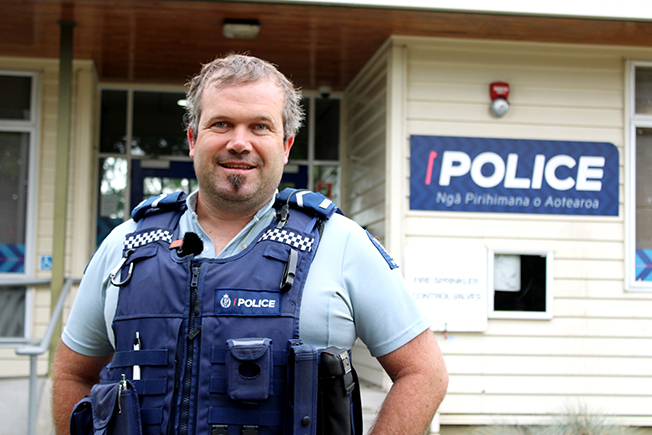 New technology that alerts Thames Police of a stolen vehicle within seconds of it arriving into town is preventing serious crimes and creating fewer victims.
According to the Thames Business Association, 384,516 vehicles drove into and out of Thames during December. Of those, 33 were either stolen vehicles or had stolen number plates.
The pinched plates were picked up by Automatic Number Plate Recognition (ANPR) cameras; however, Thames Community Constable and Acting Sergeant Youth and Prevention for Eastern Waikato Gareth Carter said the number could reflect the same person passing by the cameras multiple times, or even innocent victims whose plates had been used in a crime.
An ANPR camera in Thames was installed in late 2020 after calls from the business community, which had been struggling with ram raids and burglaries – most of which were committed using stolen vehicles.
With the camera installed, Thames Police were now alerted to a potential stolen vehicle within seconds.
“The first thing we do is look at the camera… and identify whether it’s a genuine stolen vehicle or an error with the plate reading,” Mr Carter told The Profile.
“From that moment on, if we believe it’s genuine, we’ll try to intercept it, and the current policy in place of no pursuit means we will try to be smart about it.
“If we think we know where it’s going to be, we’ll try to observe it from a distance as opposed to trying to stop it and giving chase.”
Mr Carter said a lot of the vehicles that had been recovered were found parked on the street or at an address. Quite often, they would be in a public place like at Goldfields Mall.
“So, you have to decide whether you’re best to observe the vehicle for a while, or secure the vehicle, and that’s on a case-by-case basis.
“If we can recover that vehicle without it being touched, it will be forensically towed by a tow truck, and go to a fingerprint officer and get evidence that way.”
In recent times, with the cost of petrol rising, Mr Carter said more criminals were stealing plates to be used in service station thefts.
“There’s been a growing trend around New Zealand where number plates are getting stolen from cars parked around homes. I’ve noticed in my career, the number plates may be exchanged,” he said.
“So, your number plate may be swapped on your vehicle without your knowledge by an offender, and then your genuine plates will be used in the commission of offending, and often that’s petrol drive-offs.”
The criminal would then immediately swap the plates back, he said, which was why it was important for victims to request a new plate number, rather than keep their old one.
Doing the latter meant victims could be at risk of setting off ANPR cameras across the country, and being stopped by police.
“People are struggling, so it is an increasing trend that number plates are being removed,” Mr Carter said.
“It is busier, but if we can prevent crime, then our [work] should be less. With the ram raids and stuff like that, if we can apprehend that vehicle prior to the incident, that will create less victims, which is what we are here for.”