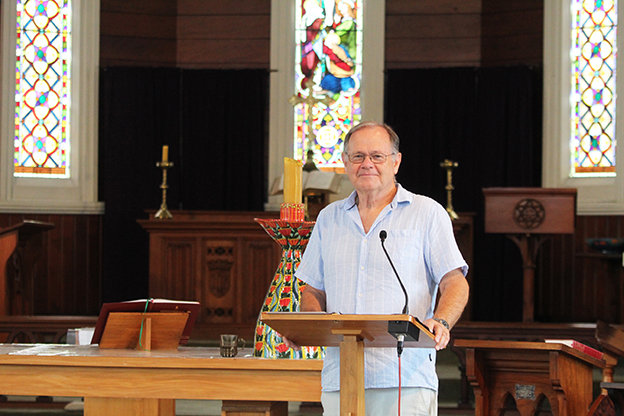 St George’s Church in Thames has seen many changes and challenges during its 150 years, but its commitment to serving the community and supporting those in need stands strong. Valley Profile reporter GORDON PREECE takes a pew to find out more.

St George’s Anglican Church in Thames has become more inclusive and diverse since opening 150 years ago.
Paul Jennings, who is heading the church’s 150th anniversary committee, said for the church to have survived this long was “absolutely wonderful”.
“Over time the church has evolved where we now welcome anyone to come and worship here, we have more te reo being incorporated and we’re forming stronger affinities with Holy Trinity Church in Pārāwai,” he said.
“We still have a prominent role in Thames, especially after five churches in the town have closed in recent times, so that makes us more relevant.”
Paul said St George’s has also had many challenges over the years.
“We’ve always struggled in terms of maintenance because it’s a Kauri building of exceptional historic importance,” he said.
“But it’s beholden on us to keep the church going even though it’s a huge financial burden at times, so we trust in the Lord he’ll provide.”
September, 1871, was the church’s second attempt at its construction after it blew over in a horrendous storm six months earlier, and by December, its superstructure was in place.
The MacKay St church opened in 1872 by Bishop Cowie of Auckland was built because the original St George’s built in 1868 couldn’t cater for its congregation due to the growing population of gold miners in Thames.
Paul said St George’s main focus today was christianity and its mission work.
“Younger generations of families are moving away from faith but younger ones are also returning, so that’s important we keep that going,” he said.
Currently, one of the biggest roles for the church was supporting those in need, he said.
“There are a lot of people with mental health issues and a lot of families disadvantaged through the economic situation who are desperate.
“So every Sunday they come into the church after the service and are fed, then the women of the church prepare a whole lot of food and send out over 140 meals on Monday night and any food that’s leftover gets delivered throughout the week.”
The first of St George’s 150th anniversary events will take place on January 28, the exact anniversary date, with a thanksgiving service hosted by Vicar Brendon Wilkinson followed by the congregation’s oldest member cutting the anniversary cake.
Events will also include a traditional dance at the church hall on February 4, a church service led by Auckland Bishop Ross Bay on February 5 and a public opening of the church throughout the week with photographic displays of the church’s history, architecture and current mission work.
In November last year, the church was also set to re-enact a performance of Handel’s Messiah by Thames Choir and Auckland choristers when the church was established in 1871 but the event was postponed due to Covid-19.

Serving the community on farm and bush