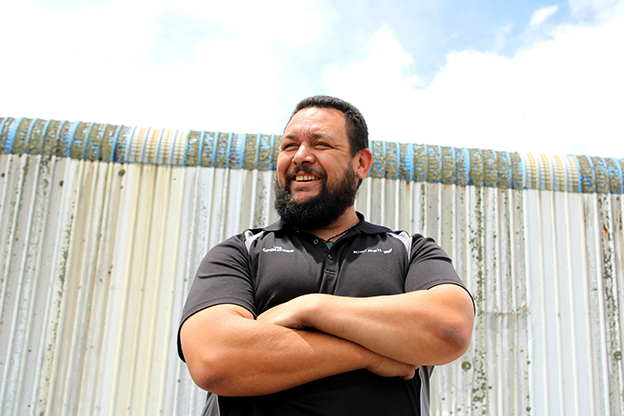 Adam Matete has become a social media celebrity in Ngatea after hosting a range of foodie events. Photo: KELLEY TANTAU

Adam Matete moved to Ngatea to live life at a slower pace, but since becoming a community celebrity, he’s come to realise quietness was never on the cards.
Adam, 44, grew up in Māngere in Auckland and did his schooling at Ōtāhuhu College, but six years ago, he and his wife Quesera and sons Logan and Brody moved to the Hauraki.
They started in Maramarua, but after witnessing the annual garage sale down Ngatea’s main street, and enticed by the stalls of creamed pāua and fried bread, they relocated to a property in town.
In 2020, Adam shared his love of food on the local community’s Facebook page, creating a competition that would determine who in town was the best carrot cake maker.
After the successful winner was crowned, residents started asking what was next.
So he created ‘Up in Smoke’ – an event that featured competitors barbecuing and smoking meat for judging.
On the flipside, he also started a 12-week fitness challenge dubbed ‘Up in Adam’, that saw a myriad of participants achieve their weight loss goals.
It was these events that led Adam into becoming a recognisable face throughout the Ngatea community, as well as being named a Hauraki District Council Onya award recipient for “working together to make a difference”.
“I get a lot of people saying hello and a lot of people introducing themselves. It’s definitely funny to be ‘that guy’,” he said.
Adam was also involved with this season’s Christmas on the Plains committee, which was in charge of hosting a late-night shopping event on Friday, December 11.
“Our mate Ron Dawson made a radio station, 88.2, and for the week before the late-night shopping, we were broadcasting to the outskirts of Ngatea.
“We’d do ‘Late Nights with Adam’ and ‘Later Ron’, just in his garage with two microphones and all of his gear, and when the Friday night came, I walked around with a headset on, a radio, a microphone, and a cell phone for the whole night MCing, which was broadcast over the radio.
“What he did was amazing, and I’ve always had a dream of being a radio show host,” he said.
“So, I lived my dream for a week.”
Adam, who works at Smart Environmental at Kōpū, told The Profile he “never, ever thought” he’d be so busy in Ngatea. “In Auckland, I had a lot of time to do other things, just muck around and lay about. Now I’m on my toes all the time,” he said.
“I thought we were coming down for a quiet life, but this small country area is not as quiet as we thought.”
Adam’s love for the town began the first time he mowed his lawns. He said it was a cloudy day and it was about to rain.
“I get around the corner, and here’s my neighbour from across the road with his lawn mower, mowing my lawn.
“Then I go around the other corner and there’s my other neighbour, mowing the front part. So, all three of us are mowing my lawn,” he said.
“Then we say ‘right, who’s next?’ and all three of us mowed each other’s lawns. That’s how it all started.”
And when it comes to family, Adam said they all supported his local star status, even if he was encouraged to take a break every now and then.
“Whenever I start talking about something new, [wife Quesera] says: ‘Oh my god, just have a break’ – but I can’t,” he said.
“It’s fun watching something that you’ve cooked up in your head come into fruition.”