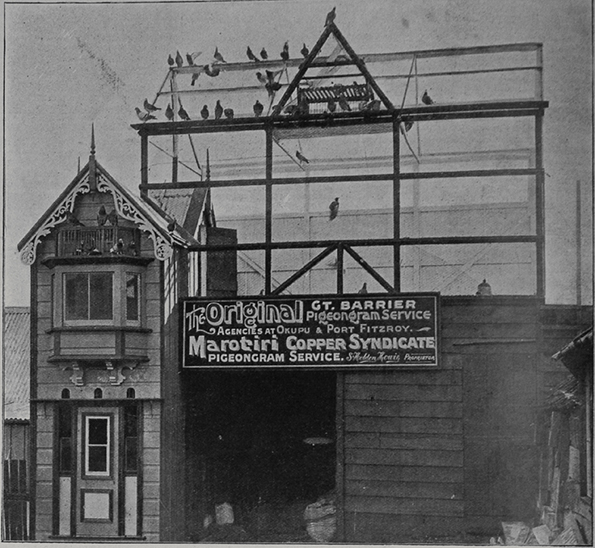 1880
Pigeons carrying reports for newspapers were mostly reliable but one for the Thames Star which should have arrived in time for the evening paper didn’t. “Our winged messenger did not turn up till this morning,” apologised the paper. The message detailed the progress of Mr Rolleston, a politician visiting the district. He was driven by the Thames Mayor to Hikutaia in the first buggy ever to travel that piece of road. They called at the Puriri Spring and tasted the water. At Hikutaia, refreshments were taken and Mr Rolleston’s health was toasted. Mr Rolleston thanked the Mayor and said he hoped the next time he visited to ride by ‘iron horse’ – train. He expressed surprise at all he had seen, which had quite contradicted his former impression of the place. From Hikutaia, the party proceeded to Paeroa on horseback where they were supplied milk with rum.
The approaches to the Omahu punt crossing needed work before the Waikato Cavalry, who were attending the Easter Review, passed over it. Settlers asked the County Council to supply the timber and they would provide the labour. Contractors were pushing on with the County road between Paeroa and Omahu. Soon it would be an easy matter to drive a buggy from Paeroa to Omahu, and but for a bad piece of road at Komata, one could drive all to way up from Grahamstown. The Piako Swamp was sold by the Piako Swamp Company to the Waikato Land Association for the neat little sum of £300,000. This company had been formed in London with a capital of £600,000, for the purpose of investing in land in the North Island. This area had once been denigrated as a veritable bog, which, if trodden on by man or bullock, would heave and shake all round for miles, so wafer-thin was the surface and so water-gruelly the slush that served as subsoil.
For several weeks, millions of fish began coming ashore to die all along the east coast. They came gasping to the surface and appeared poisoned. Three cats had also died, possibly from the effects of eating the fish.  When opened, the fish had nothing in their stomachs and the phenomenon was attributed to the heat of the sea water. Someone who used to often walk from Grahamstown to Tapu Creek had, during the autumn months, noticed large quantities of dead and dying fish cast upon the shore. In many instances the scales were nearly all scratched off them. He thought the fish had some yearly distemper, which had assumed unusual proportions this season.
Some years previously, enormous quantities of shags died in the Hauraki Gulf; their death may have had some connection with the demise of the fish.
At Paeroa, a man was charged with using threatening and abusive language for the purpose of annoyance and provocation by saying to another: “You dirty little blackguard, only that I would not dirty my hands on you, I would put you in the gutter.”

Serving the community on farm and bush