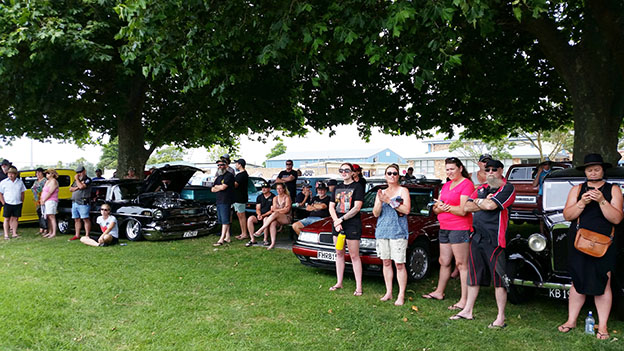 Interesting and out of the ordinary vehicles were on display at the annual Ngatea Customs and Classics and Van Revival recently.
The fundraising event at Ngatea’s Hugh Hayward Domain on December 27 celebrated its fifth year and attracted around a thousand people.
Event organiser Fish Mackay said the 170 vehicles on display came from as far away as Whangārei and Palmerston North. “We had Harley Davidson motorbikes, an AC Cobra replica, a 1930s Morris Eight, a Rolls Royce, a GT40, Hot Rods, Trans Ams, V8 Bedfords and many other custom vans and muscle cars,” he said.
“We also had a Vauxhall Victor station wagon, which was only one of two in New Zealand.”
Fish said the public were “very happy” they could attend an event which hadn’t been cancelled due to Covid-19.
“Hauraki District Council were very helpful in giving us the Covid-19 guidelines to run the event,” he said.
“We had QR Codes for people to scan in and everyone who came through needed to have their vaccine passes checked.
“All but one was turned away but overall we were very happy

with the public response to the Covid-19 rules, which made the event really awesome.”
Fish said in the previous four years, the event awarded ten trophies for various categories but at 2021’s event, eight of ten trophies were given to random cars as an appreciation to owners who made an effort to come despite Covid-19 rules.
“That went down very well with the public,” he said.
“We also gave away a trophy for best van and a people’s choice, which went to a 1990 Mitsubishi v3000 New Zealand Police car.”
The event raised $900 from the public’s gold coin donations required for entry, and the funds will be split between Ngatea Primary School and Ngatea Volunteer Fire Brigade.
“I’d like to say a huge thanks to the locals who supported the event, Hauraki District Council who’ve been awesome every year, my van club volunteers and those who were at the event gate to check everyone’s vaccine passes,” Fish said.