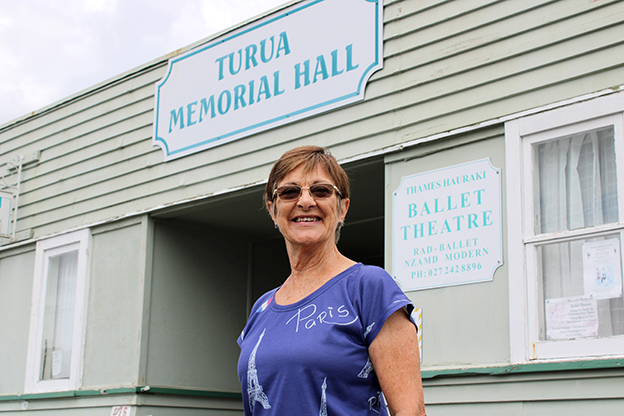 People always ask Pauline Germon what she, a former principal ballerina, is doing in the Hauraki Plains.
But for Pauline, who danced with the Royal New Zealand Ballet for 12 years, was named one of the 100 most influential alumni of Epsom Girls Grammar and, more recently, named a Hauraki District Council OnYa community award recipient, there’s no place she’d rather be.
Born and bred in Auckland, Pauline, née Pauline Tronson, began her career as a ballerina at age 18. She went on to have a long-running vocation with the Royal New Zealand Ballet, and was the company’s principal ballerina for six years, dancing most of the major roles in a range of repertoires.
At age 27, she toured the country as the female lead in Romeo & Juliet, performing opening night “by default” because the other leading lady twisted her ankle at dress rehearsal.
“In ballet, you can be dancing a lot of fantasy roles, but Juliet was a real young woman with a tragic story, and I think that both artistically, technically, creatively… in every way, that was the most rewarding piece I’ve ever danced.”
Principal roles were “hugely demanding”, she said, but for 12 years, she sustained only minor ankle injuries.
“As a professional dancer, what used to carry me through when I was often exhausted was the music. If I just involved myself in the music, I could always push through,” she said.
“Another reason that I endured for such a long time was that I remained almost injury-free. Professional dancers have probably about five years, maximum, and a lot of that is because of the touring life, and then your personal life starts to collide.
“There were some good marriages within the company, with dancers marrying dancers, but what would happen is both male and female dancers would meet someone who wasn’t involved in the career, and then they would have to make the decision to leave the touring life and train for another career.”
But Pauline met her husband, Robin Germon, after she retired from dancing at age 31, meaning she didn’t have to abandon her lifestyle.
They married in 1998 and had a daughter, Ruth.
“When Ruth was getting up to five, we realised what the city had to offer for our future was not there. But we used to come through here to go to holidays at Waihī Beach, so we drove through Ngatea and stopped at The Copper Kettle umpteen times like people do, and then we put our house on the market and ended up with six weeks to make a decision.”
When they found a house in Ngatea, they knew they had to make the “jump” – and it turned out to be a fortuitous decision.
“I had plans to go to Auckland to continue teaching, but I’d only been here a week when

the local teacher offered me the school, and the Thames teacher had moved to Auckland, so I saw the open door,” she said.
“The other part of it was extraordinary… I had Doreen’s Dress Ups up the road, and one more block away was a chap who did woodturning, and his wife painted things. So, I had my costume lady and my props and set man just two blocks up from the Turua Hall.
“So many things were quite astounding.”
Pauline began teaching at the Turua Hall 20 years ago under the banner of the Thames Hauraki Ballet Theatre, but to run the school, she needed to be Royal Academy registered.
“I actually sat my teachers registration exam in the Ngatea War Memorial Hall, with an Australian examiner who came all the way from Adelaide. She got off the bus at Waitakaruru and thought she was in the back of nowhere,” she recalled.
“I remember that every time I go into the hall now.”
Pauline has remained at the green-painted Turua Hall ever since, passing on her skills and knowledge to local dancers who have gone on to do illustrious things.
Like Vida Polakov, who danced with the West Australian Ballet, or Kimberley Mear, who went on to train at the National Theatre Ballet School in Melbourne.
“What I have been very pleasantly astonished about is the level of talent that I have found here, as well as a tremendous percentage of mixed nationalities. At one point, I had 30 different nationalities in my school out of 60 students, and I would have never got that in Auckland.”
Ballet was known to be a demanding art form, not just for the students, but for those teaching it too, she said.
“Because we have to keep up our game; we can’t say ‘no, that’s OK’. I asked a little girl if she enjoyed dancing, and she said to me: ‘I love dancing Mrs G, but I don’t always like to get it right’, and you’ve got to get it right,” she said.
“That’s why I’m still here. I love the excellence, I love that there’s only one way to do it, and it’s the right way. It’s a lifelong challenge, and you can never say you know it all.”