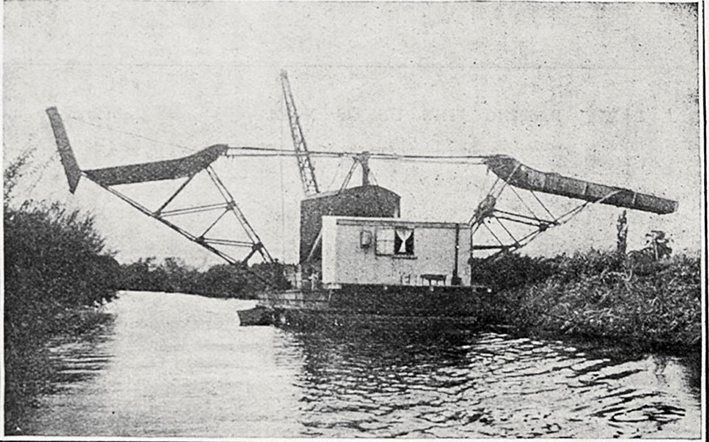 A dredge at work on the Hauraki Plains. Photo: SUPPLIED

A splash and a cry for help startled those working on a dredge in the Waihōu River near Paeroa during a June night in 1922. Although illuminated by the dredge lights of around 300 candle power, the surrounding area was very dark.
The Public Work department’s dredge was engaged in stop bank work – part of the vast Hauraki Plains drainage scheme which included flood control of the Waihōu River. By 1922, a number of men were employed in clearing away the willow trees from the river banks and constructing stop banks to keep flood waters from the farm lands.
Work often continued into the night and now Stephen Hughes, a winch man on the dredge who had been helping to connect one of the two pontoons, had fallen overboard. Donald Young, dredge engineer, immediately jumped into the river and swam to where he heard the cry but when he got there, there was no sign of Stephen. Hiram Crompton scrambled into a boat with John Fox and they rowed towards the spot but could find no trace of him either. Dragging operations the next day eventually discovered Stephen’s body in 18ft of water about 22 yards from where he was last seen.
It seemed Stephen had been walking over the connecting plank between the two pontoons when he slipped and fell. At the inquest, dredge fireman John Fox said he thought the plank should be wider.
Constable McClincy said he had heard complaints about the plank and he thought it dangerous for men to work on the dredge at night time in winter. William Dykes, overseer and dredge master, said he never had any complaints in regard to the plank. More planks might, however, be used. A verdict of “accidental death by drowning in the Waihōu River by falling off a pontoon while following his usual occupation” was given. A rider was added recommending the provision of more planks on the pontoons. The coroner highly commended the bravery of the engineer, Donald Young, in plunging overboard on a dark night and also commended the promptness of John Fox and Hiram Crompton in launching the boat and endeavouring to locate Stephen.
The mammoth Hauraki Plains drainage scheme, begun in 1908, had required strong hard-working men.
Workers included Dalmatians from the gum-digging fields, Australians based in camps at Turua and Ngatea, and local Māori. Working the dredges could be dangerous and there were many terrible accidents. Stephen was 39, a married man with six children who had lived at Mill Rd, Paeroa. Sadly his widow, Ethel, died just five years later. Their orphaned children were then cared for by their maternal grandmother, Mrs Mary Pitkethley, a local midwife and nurse. Stephen and Ethel are buried at Paeroa’s Pukerimu cemetery.